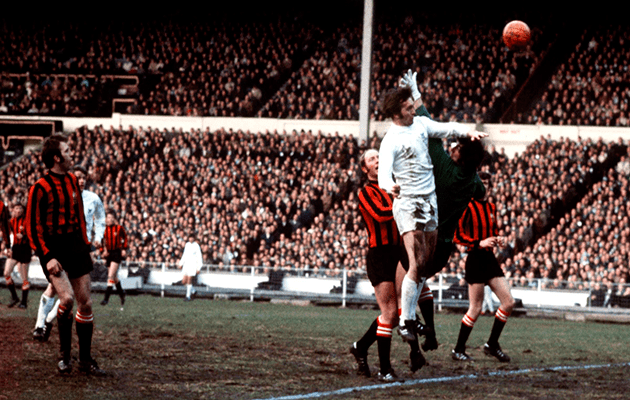 Now Alan Shearer is screening a documentary about the dangers of heading. Very public spirited of him and good to know that after all those years of heading goals, the problem doesn’t apply to himself.

But in the last analysis, what use is his endeavour? What we know alas beyond all reasonable doubt is that certain players are liable to brain damage, amnesia, from heading. Years ago there was the sad case of Jeff Astle who had headed so many fine goals for West Bromwich Albion and who succumbed at a very early age to the deterioration.

Much more recently, a grim new light has been shone on the problem by the decline of no fewer than three of England’s World Cup winning team of 1966: Ray Wilson, left back, Nobby Stiles, midfield, and Martin Peters, deep outside left but a central midfielder with West Ham. Not, you might notice, Geoff Hurst whose superb power in the air gave England such important goals, not least the one he headed in the quarter-final against an implacable ten-man Argentina.

Of the three sufferers you wouldn’t have thought that little Stiles in his midfield role was especially obliged to head the ball constantly. But the fact that three of that ever celebrated team should have succumbed so close together threw the whole sad problem into intense relief.

But what is to be done? Should heading be permitted at all? G.O. Smith, that great amateur centre-forward and scorer of many goals for England in his distinguished career, which spanned the late 19th and early 20th centuries, was adamant on the subject. He never headed the ball at all, and was on record as saying that when a team started heading the ball, there must be something wrong.

The fate of those unlucky three and now the Shearer documentary will no doubt intensify demands for a thorough investigation. Which, with all due respect, would cost millions and establish nothing. If not for the manifest fact that some players are subject to brain damage through heading while others are not. As I have said before, the only sure way of banning brain damage from football is simply to abolish heading. A conclusion which I offer for nothing. Frankly, I cannot see this happening. Can you?

The only and remote alternative is to examine all players as early as possible in their career to discover whether they are likely to be subject to brain damage. And can you remotely imagine that happening?

Even if it did, what would happen then? Would players who failed such a test automatically be named? And if they refused to be banned would they be compulsorily suspended? All the surveys and costly investigations in the world will not, cannot, take us any further than this. One way or another heading, with all its implicit drama and dangers, is here to stay.

Arsenal’s recent shareholders meeting was the usual angry irrelevance. Massively and cogently critical at the way the club is being run, scornful of the hierachy, astonished at the huge bonus accorded to the chief executive Ivan Gazidis, who in a strange contortion of logic announced that the club, though unqualified at last for the European Champions Cup, had had a highly successful season.

Alas for the angry shareholders they were as always outvoted by the mass of votes wielded by the Establishment. So Arsene Wenger is still there, deploying the sophistry of what the Italians call victimism. No rational explanation of why at Manchester City he did not bring on his hugely effective and expensive French striker Alexandre Lacazette, who cost £60million and who duly proceeded to score. By the time he came on it was well into the second half.

Wenger the tactician, but there he is and there he stays.

Good, though, to see the likes of Martin Keown urging the claims of Jack Wilshere to be in a midfield which so badly needs his technique and above all his passing. On a recent TV programme, Glenn Hoddle, once such fine long passer of the ball, felt Wilshere was still slightly off the pace. But he could still give Arsenal’s attack more coherence with his passing.