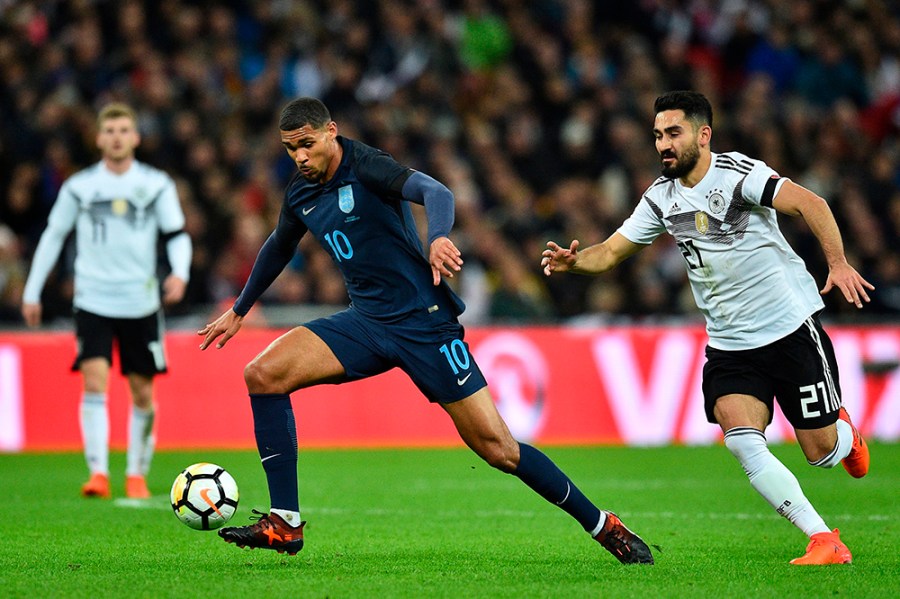 The Big Match Temperament is a phrase seldom if ever encoutered today, but it might be pertinent in the case of Ruben Loftus Cheek, the revelation of England’s commendable 0-0 draw with Germany at Wembley.

At Chelsea virtually from childhood, his talents were recognised early as he made his way up through the junior teams yet his appearances in the top team have at best been sporadic. No uncommon occurrence at Chelsea it must be said, with their array of bright young talents.

Tall, strongly built, adroit on the ball and a shrewd user of it when in possession, Loftus Cheek seemed to take to international football like a duck to water. An experienced German team could never subdue him.

Inevitably the cry went up that Chelsea should be making good use of him, rather than farming him out on loan to struggling Crystal Palace. Yet can they really be blamed? They have spotted him early, they have clearly coached him well, but on the various occasions when they have promoted him to the top team, he has been inconsistent.

Cometh the hour, cometh the man, however, and he was his team’s outstanding player at Wembley, even to the point of surprising his experienced opponents with the occasional nutmeg.

One of the greatest of all English or any other player at Wembley was unquestionably Stanley Matthews, who as late as 1956 when he was 41 years old with that famous winning Cup Final against Blackpool three years behind him, ran rings around one of the best full-backs in the world in the shape of Brazil’s Nilton Santos.

Yet scroll back to 1934 and the notorious Battle of Highbury, when Italy ran amok, what do we find? Geoffrey Simpson, the chief sports columnist of the Daily Mail, writing that Matthews had shown “the same faults of slowness and hesitation”, as in a recent inter League match, and suggesting, “He may not have the Big Match Temperament.” Matthews!

Various players and pundits, picking their ideal England team for the World Cup finals, have omitted Loftus Cheek which seems to me an aberration. It is clear that at only 21 has the skill, courage and confidence, not to mention the the 6ft3 height, to succeed at any level on his day. The match against Germany was certainly a day, he even treated himself to a couple of successful nutmegs, despite the formidable opposition. Russia I am sure would not worry him.

Speaking of Chelsea, it was interesting to see that Michael Emanalo has left the club after 10 years. Having risen from the role of chief scout, which few could understand, to technical director. When he arrived, a former Nigerian World Cup player, the only coaching he had ever done was of a girls’ team in the USA.

It was noted by an observant journalist that when he sat in the dugout next to the Italian manager Carlo Ancelotti, not a word was addressed to him throughout the game. Yet up and up he rose, becoming it is said a great favourite of the billionaire Russian owner, Roman Abramovich.

It appears that he fell out with current manager Antonio Conte over his transfer policy last summer. More crucially, it appears that Abramovich has turned the light his countenance away from Emanalo, so that was inevitably going to be that. Quite why the owner esteemed him so highly in the first place remains something of a mystery. As does the fact that initially, with such meagre coaching experience, he was enlisted at all.

All credit to Alan Shearer for “fronting” the documentary about heading the ball and amnesia. Shearer pointed out that in training as a player he had headed the ball countless times without any apparent ill effects. Good for him and long may his health continue, but amnesia tends to affect players – such as the 1966 World Cup trio Peters, Wilson and Stiles – decades after they have retired.

It is suggested that the FA had been sitting on a report about the affliction for many years, but even if true, it is doubtful what could be done about things then or now; as various medical experts who contributed to the programme seemed to suggest. You cannot after all, as one of them pointed out, extract a player’s brain while he is still alive and playing, or even later.

So why some players succumb to the affliction while famous headers of the ball like Everton’s Dixie Dean do not, remains a mystery. As I have said before, the only sure way to protect vulnerable players is to cut out heading altogether and who is ever going to do that?