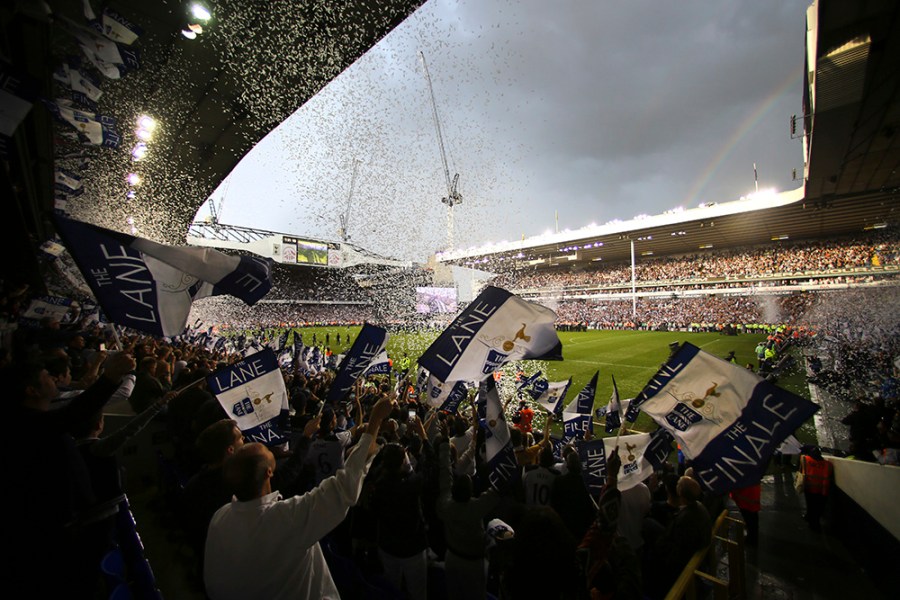 So goodbye White Hart Lane, or should it just be au revoir since the old stadium is demolished and the new one will arise on the same site. In truth, White Hart Lane is a misnomer, since the correct location is on the High Street. And there of course it has been in all its historic seasons since 1898.

I first went there during the second world war as a 10-year-old with my father when Arsenal, who I then supported, shared it. The ARP (Air Raid Precautions) took over Highbury in 1939, forcing Arsenal to share with Spurs at White Hart Lane. Not till season 1946-47 did the Gunners return home.

This at the time may have surprised many people since Spurs and the Gunners were hardly kissing cousins. Tottenham had been furious when Arsenal in 1913 crossed the Thames from Plumstead to take up residence in Highbury just a few miles away. Anger which was inflamed when six years later Spurs went down to the Second Division, with the resumption of official football following the war, while the Gunners, though they had come only fifth in the Second Division in the last pre-war season, were promoted. Spurs had actually been relegated from Division One in 1915 but had expected to be confirmed in the top division when in 1919 it was expanded.

The deeply unconvincing and surely spurious reason given for Arsenal’s preference was that they had been longer in the Football League than Spurs! Who in fact had won the Cup as long ago as 1901 when they were still a Southern League – the future Third Division South – club.

The manipulation of Arsenal’s owner Sir Henry Norris had much, it was felt, to do with it. As for Fulham, he had actually wanted to merge them with Arsenal; the FA refused.

Spurs immediately returned to the top division and won the Cup again after 20 years at Stamford Bridge in 1921. Long years later, I was given the Arsenal programme for their home League match against Spurs that year. The previous week, games being wrecklessly played on a home and away basis, the unfancied Gunners had actually had the temerity to go to White Hart Lane and win. That programme, edited and written by the future Arsenal manager, the Scot George Allison, seethed with vitriol, attacking those papers that had criticised the Gunners’ victory. Spurs did win the return.

Memories of Spurs at White Lane crowd in. Of managers, none more so than Arthur Rowe, who became a valued friend. Pre world war two, a local man, he had been captain and centre-half at Tottenham. Becoming manager in 1949, he schooled the team in what was known as push and run football, give and go, you might say, which in consecutive seasons won them the Second Division and then the First. Right-back, “The General”, was Alf Ramsey. Billy Nicolson, such a future success as manager, played sturdily and supportively in front of him as right half. Years later, Nicolson himself would be abetted by the inventive, fluent and highly original, on and off the field, in Northern Ireland skipper Danny Blanchflower; king of the famous car park before each game when he dispensed his wisdom to us journalists.

Distant days indeed. Only one journalist, a kindly local man, at that time actually had a car and one was grateful to be given lifts by him. Today, the players cruise in their large, luxurious vehicles.

Under Nicolson and Blanchflower, Tottenham in 1961 achieved for the first time that century the League and Cup double. Rowe? He had shamefully been forced into a nervous breakdown by two sinister directors who tried to undermine his tactics in the club programme.

Jimmy Greaves arrived with brio midway through the season after the double victory. He had actually arrived and excelled as a 17-year-old playing for Chelsea against Tottenham at White Hart Lane.

Over the years Spurs had had such a cornucopia of stars. Glenn Hoddle, with his skills and superb passing, was very much one of them, a club he joined as a youth and would eventually manage. He once told me that every trick he knew he had taught himself all but one in his own back garden.

Tough, resillient Scot Dave Mackay at left-half was the perfect complement to Blanchflower. And goalkeepers! Big, powerful Ted Ditchburn in the push and run team. Splendidly versatile Pat Jennings, just as good with his legs as his hands.

From 1978 onwards, the Argentina World Cup pair, Ossie Ardiles, that subtle midfielder, and Ricky Villa, who would score against QPR one of the most spectacular solo goals in the story of the FA Cup.

And today, another luminous homegrown talent in Harry Kane, worthy successor to such as the powerful, skilful Martin Chivers.