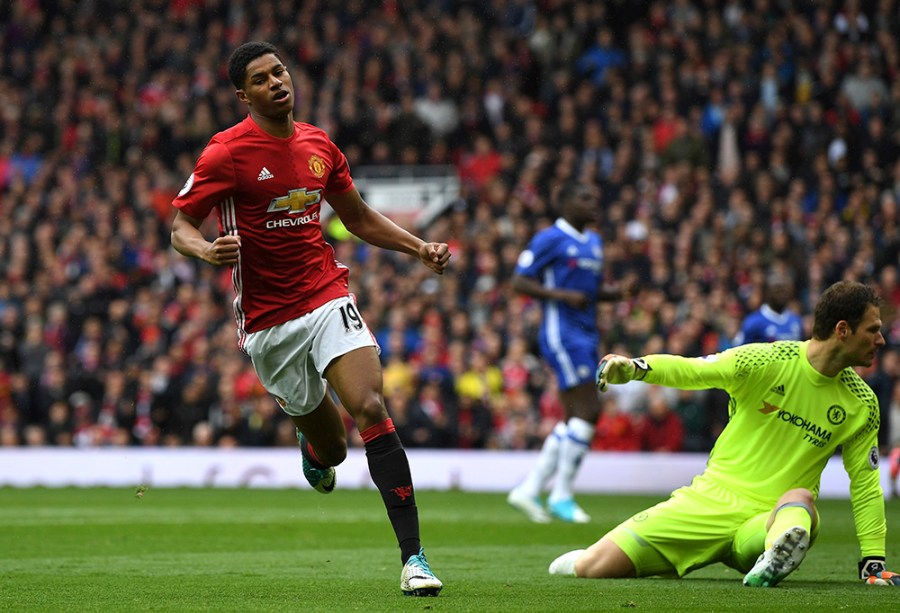 The dramatic Manchester United-Chelsea game raised a profusion of issues. Was United’s first goal legitimate? Was Antonio Conte right to blame himself for Chelsea’s defeat? Should Gary Cahill have been sent off for a dangerous foul? What price the dynamic young Marcus Rashford now that Ibrahimovic, that enduring talisman, is ready to play again?

There is no doubt that referee Bobby Madley showed supreme indulgence to United when Ander Herrera handled the ball quite blatantly. Madley allowed play to go on, giving Herrera the chance to give Rashford the inspired pass which allowed him to go on at pace, brushing pass the vulnerable David Luiz to shoot United into a lead they never lost.

Conte declared that “he wasn’t able to provide the right motivation”. Really? Surely there was more than adequate motivation for a Chelsea team topping the Premiership and confronted with a United side which, on the face of it, was well within their powers – even when two players dropped out injured – to defeat.

On such form Rashford is plainly a candidate to play up front for England. The prospect of Ibrahimovic, so many years older and for all his great skills much slower, keeping him on the bench, is depressing. For England, I feel that Harry Kane could profitably be flanked by the incisive Rashford. For me the jury on Gareth Southgate is still out, but one would hope that the one man up front formation is not ineluctable.

Meanwhile, all credit to the Special One, who got his tactics and selection so impressively and courageously right. Herrera marked the usually irresistible Eden Hazard out of the game, and still found time to do crucial things in attack. Chelsea, it is true, had to make two unexpected changes in defence. And not for the first time – remember the last World Cup and Germany’s thrashing of Brazil? – we saw how vulnerable Luiz can sometimes be.

The one thing that puzzles me over the recent adventures and misadventures of that talented young Evertonian, Ross Barkley, is why his assailant in that Liverpool nightclub has not been arrested and charged. By all accounts his vicious assault on poor Barkley was wholly unprovoked. Yet the proprietors of the bar have sacked the employee who revealed the incident.

A ludicrous and wildly gratuitous insult by the ineffable Kelvin MacKenzie in the Sun, where he inexplicably and fatuatously compared Barkley to a gorilla, makes you wonder why the Sun ever re-employed him at all. It was under his misguided editorship 28 years ago that the Sun swallowed hook line and sinker the repugnant lies, promoted via a news agency by the Sheffield police, accusing the hapless Liverpudlian victims of the disaster of drunken antics.

Barkley replied to all this calumny and controversy in the best possible way, by playing prodigiously for Everton against Burnley. But I’d still like to read of that arrest.

Just what did Sir Chips Keswick mean by walking out of Selhurst Park alter Arsenal had so ineptly given away a second goal against Crystal Palace? The implication was that he was motivated by disgust, but that hardly equates with his previous resolute defence of Arsene Wenger, terminating a shareholders’ meeting where Wenger was criticised. So was Keswick’s abrupt departure another nail in Wenger’s column? Or was there another utterly different motivation for his exit? I think we should be told.

Good to see Brighton at long last back in the top division after all those tormented years. Only sheer bad luck prevented their promotion last season. They were shamelessly betrayed by their owner when forced to leave the Goldstone Ground where they had played for so many years; with bitter exile to remote Gillingham, then seasons at the tiny athletics Studium at Withdean, which at least was on the fringes of Brighton itself.

Chris Hughton, unlucky to lose his previous job at Newcastle, may permit himself a certain wry satisfaction in seeing his own team promoted while Newcastle, for all their expensive buys under the aegis of Rafa Benitez, are lurching their way to probable promotion.