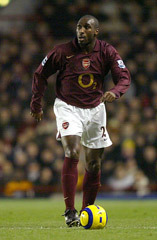 Portsmouth have confirmed that Sol Campbell will sign for them later today, subject to agreeing personal terms.

Campbell underwent a medical at Fratton Park yesterday, with a view to signing a deal with Harry Redknapp’s side.

Arsenal released Campbell in July because he wanted a to play abroad.

Understandably, his decision to relocate to the south coast has surprised Gunners manager Arsene Wenger.

“I have no regrets,” Wenger said of his choice to release the player. “But it is a big surprise to me because he cancelled his contract to go abroad.

“Have you sold Portsmouth to a foreign country? No.”

Campbell announced at the end of last season that he was leaving Arsenal to seek “a new challenge” after five years with the London club.