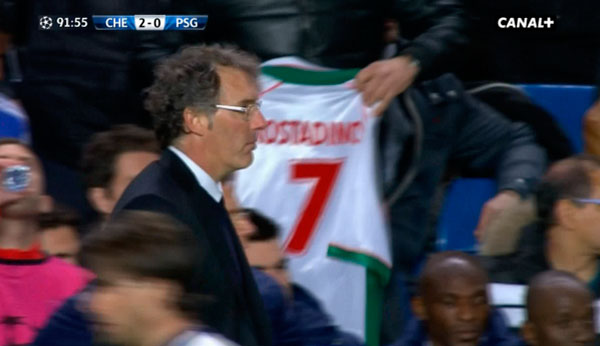 There was a bizarre moment towards the end of Chelsea’s 2-0 win over PSG on Tuesday night, when a person in the crowd unveiled an Emil Kostadinov Bulgaria shirt..

For those too young to remember, Kostadinov scored the last minute winner against Blanc’s France in a qualifier for the 1994 World Cup. That goal ensured Bulgaria reached the finals whilst the highly rated French outfit missed out.

Blanc would go on to win the World Cup and the European Championships but this is a memory he would rather forget.

The fact that 21 years on, someone wishes to remind the former France defender of that night is quite astonishing. Did he buy the shirt just for the occasion or does he bring it to every Chelsea match? Or, is this someone with a personal vendetta against Blanc? If so, has he really been waiting more than 20 years to remind him of that evening in Paris. Curiouser and curiouser.

No doubt the individual’s motivations will soon emerge, but in the meantime, this is the infamous moment from 1993.

It was a bad night for France and an awful night for David Ginola who, given the chance to run the clock down, opted to instead to deliver a cross which launched Bulgaria on the counter-attack.

France coach at the time, Gerard Houllier, described Ginola as someone who had “sent an Exocet missile through the heart of French football” and as the “assassin of the team”.