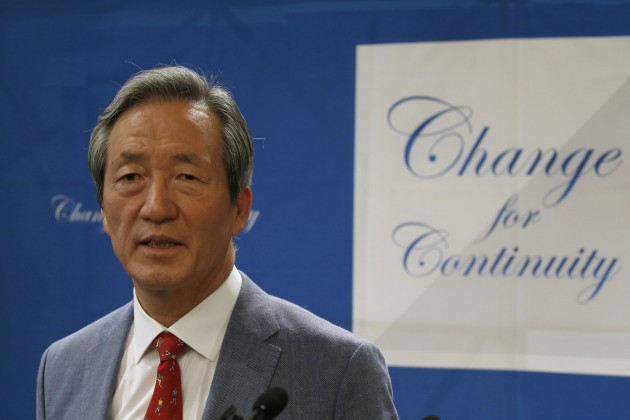 Chung Mong-joon has promised to be one-term revolutionary leader of FIFA after launching his candidacy to become the next president of the world football federation in Paris.

The only previously declared heavyweight had been Michel Platini, French head of European federation UEFA although old superstar Zico from Brazil and Liberian FA boss Musa Bility have also expressed an interest.

The 61-year-old scion of the Hyundai empire has said, ahead of today’s campaign launch, that FIFA needs a fresh approach after the scandal-twisted downward spiral of the last five years under Sepp Blatter. He promised: “I can fix FIFA’s problems in four years.”

Chung is an honorary vice-president of FIFA but has been out of executive office since being ousted as Asia’s FIFA vice-president by Jordan’s Prince Ali bin Al Hussein in 2011.

He said: “It’s time to restore common sense at FIFA. The real reason it is so corrupt is that the same person has been in charge for 40 years. Absolute power corrupts absolutely.”

Platini, a FIFA vice-president since ousting Lennart Johansson at the head of UEFA in 2007, was criticised by Chung as part of the problem, not the solution.

Chung said: “Platini is my good friend, but he does nothing to appreciate the seriousness of the current FIFA crisis.”

Platini’s status as early favourite has brought him other campaign concerns; FIFA is investigating a complaint from UEFA about an “alleged smear campaign” against him.

The world federation has been asked to explain the apparent distribution from its headquarters of a document entitled ‘Platini: Skeletons in the closet.’ The article was sent anonymously to several newspapers, according to the German newspaper Welt am Sonntag.

FIFA has said it is investigating the provenance of the article which, the newspaper claimed, had been written Thomas Renggli, a former editor of the world federation’s weekly e-magazine.

A UEFA spokesman said: “I can confirm that UEFA general secretary Gianni Infantino sent a letter of complaint to FIFA secretary-general Jerome Valcke.

“We have asked FIFA to investigate the origin of this article because we are concerned by the reports of an alleged smear campaign against the UEFA president.

“Copies of this letter were also sent to [FIFA’s independent chief ethics investigator] Cornel Borbely and [chairman of the audit and compliance committee] Domenico Scala for ethics and transparency reasons.”

A further barb aimed at Platini emerged from an interview Blatter gave to a Dutch newspaper in which he claimed his brother had been warned by the Frenchman that Blatter risked jail if he stood again as FIFA president.