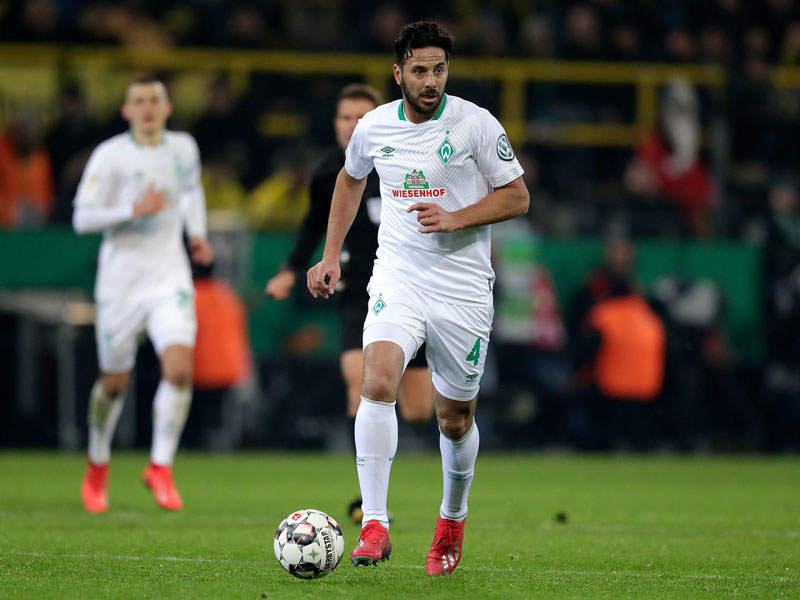 Werder Bremen’s evergreen striker Claudio Pizarro, still some way off his 41st birthday, is football’s answer to Methuselah, the Old Testament figure who was alive for the best part of a thousand years.

Groundhog Day at the Weserstadion is the ageless Peruvian on the scoreboard. In four spells in Bremen over nine seasons, he has totted up well over 100 German league goals and thanks to his latest exploit – coming off the bench to net a 97th minute free-kick equaliser in a 1-1 draw at Hertha Berlin – he is now the oldest goalscorer in Bundesliga history (40 years and 136 days).

The previous holder of this particular record was another Werder favourite, midfielder Mirko Votava, who was 40 years and 121 days old when finding the back of the net in August 1986 against Stuttgart.

Pizarro’s last-gasp effort to deny Hertha all three points was typical of this voracious goal-hunter: insisting on taking the kick, audaciously gambling on the Berlin wall leaping and firing home a low shot, albeit via a couple of anarchic deflections.

Throughout his pro career – at Alianza Lima, Bremen, Bayern Munich, Chelsea and Köln – Pizarro has proved something of an acquired taste. Critics often have accused him of lacking intensity, he flopped at Chelsea in the 2007-08 season and for many, he is the ultimate flat track bully, far more effective against bog-standard domestic opponents than in the Champions League.

However, it’s impossible to please everyone and in terms of his statistics and longevity, Pizarro obviously has delivered. Within touching distance of 200 goals in the German top-flight, he currently stands fifth in the all-time Bundesliga scoring charts and is the number one foreign marksman in the history of the league.

Technically accomplished, cute, crafty and composed in the box, strong in the air and an excellent reader of the game, the Peruvian simply was born to score goals. And always did with the broadest of smiles on his face. This enthusiasm has been his elixir for everlasting sporting life.

Parts of central Peru boast a substantial number of descendants of 19th century German settlers. Moving in the opposite direction, Pizarro has achieved similar success in the pioneer game. “My wife often tells me I’ve become German,” he laughs.

With maximum points from their last four Bundesliga games – a magnificent run featuring a 3-1 home win over Bayern Munich and a 5-1 victory at Mainz – Leverkusen are suddenly looking sharp again after spending much of the Autumn Championship wearing ill-fitting hand-me-downs. All credit to new ‘Werkself’ coach Peter Bosz, who took over from the sacked Heiko Herrlich in January. The Dutchman’s attack-orienatated 4-3-3 system is working like a dream and quite clearly, the BayArena players already trust him implicitly. Who said Bosz was damaged goods after failing last term at Dortmund?

Bundesliga runners-up last season, Schalke continue to be the surprise fall guys of the season, without a win in four and becalmed and bemused in the lower reaches of the Bundesliga table (14th). In any other season, Schalke would be in real danger of relegation. But fortunately for the Royal Blues, the three lowest-placed clubs in the league (Nurnberg, Hannover and Stuttgart) are in even worse shape.  “At times, we’re playing with fear,” says coach Domenico Tedesco. “We’re not courageous enough.” A fair point.