Europe’s top clubs are discussing possible changes to the Champions League, but have denied that they want to launch a breakaway ‘super league’.

The European Clubs’ Association (ECA), which represents more than 200 of Europe’s leading clubs, said it will work with Uefa on any “improvements” before 2018.

ECA boss Karl-Heinz Rummenigge has suggested “a tournament consisting of 20 teams from Italy, England, Spain, Germany and France”. Such a tournament would exclude representatives from Holland and Portugal, whose clubs have won the competition on six and four occasions respectively. France, by contrast, have only provided one winner of the tournament since its inception in 1955-56.

Currently, 78 teams qualify from the 54 member leagues across Europe, with 32 teams entering the lucrative group stages. At present, Spain, England and Germany with four teams a-piece, supply the most teams to the competition. 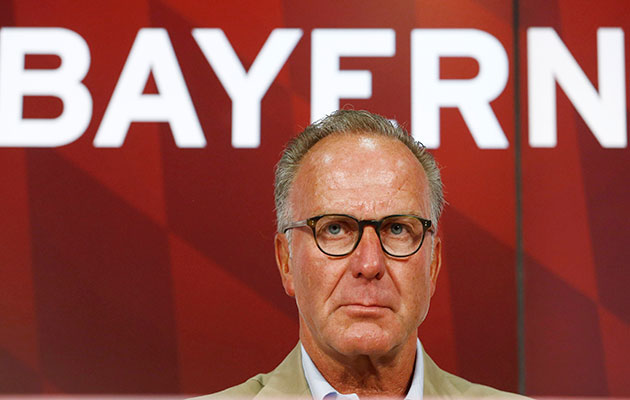 Bayern CEO Karl-Heinz Rummenigge has previously led calls for the creation of a European Super League.

Following a meeting on Tuesday, Rummenigge said that “stagnation means regression” but promised to “find a good and balanced solution”.

ECA senior vice-chairman Umberto Gandini said there was not yet an “understanding” that the Champions League would have to change but added: “We will listen to the main actors of the competition and Uefa itself and find out what is best.

“We are not designing anything at the moment. We are starting a review process of the Champions League and working with Uefa to see which improvements we can bring in to have the most attractive football product every year.

“It may be just a slight change to the access list, it may be many aspects of the competition that can be reviewed and adjusted.”

There have been suggestions that the elite European clubs should be guaranteed direct entry into Europe’s premier club competition, rather than through their domestic league position the previous season.

Rummenigge, who is chief executive of Bayern Munich, told a German newspaper last month: “A super league outside of the Champions League is being born. It will either be led by Uefa or by a separate entity, because there is a limit to how much money can be made.”

Changes to European club competitions can only be made after three-year cycles, with the current one finishing after 2017-18.