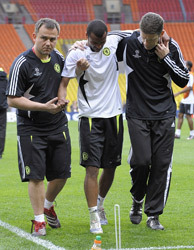 With 150+ markets on tonight’s Champions League Final between Chelsea & Man Utd you’ll be hard-pressed to find more markets in one place. Click here!

Chelsea have suffered a major injury scare on the eve of tonight’s Champions League final against Manchester United after Ashley Cole suffered a knock to his right ankle during training.

The Chelsea full-back was hurt by a reckless lunge from team-mate Claude Makelele as the Blues trained on the Luzhniki Stadium pitch.

The England international underwent immediate treatment, with strapping being applied to the damaged area.

Cole looked unhappy as he was forced to watch the rest of the squad train ahead of tonight’s clash with Manchester United.

Cole did return to training, but was eventually forced to make a premature exit.

The defender, who has been earmarked to mark Cristiano Ronaldo, is now a concern for manager Avram Grant.

In a statement on their official website Chelsea said: “In a challenge with Claude Makelele in front of hundreds of cameras and the world football press, Ashley Cole hurt his right ankle.

“He was treated, it was tested, then strapped – but after consultation between Grant, club doctor Bryan English and physios Dave Hancock and Thierry Laurent – Cole resumed and took full part in the final training game – only disappearing down the tunnel after the players had listened to Avram’s address and been stood-down for a final kickaround.”

With 150+ markets on tonight’s Champions League Final between Chelsea & Man Utd you’ll be hard-pressed to find more markets in one place. Click here!