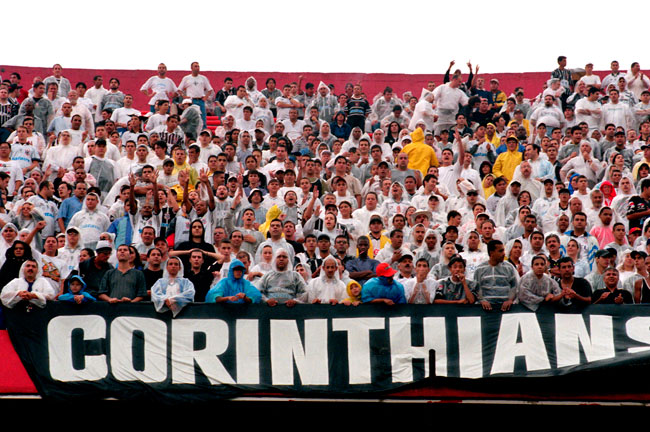 Corinthians fans are so unhappy with their team, they are now fight amongst themselves.

It’s not a great time to be a fan of Brazilian outfit Corinthians. The club began the year by losing four matches in a row in the Sao Paulo state championship, including 2-0 defeat to Bragantino on Wednesday.

But, while it’s no fun being a fan of the 2012 World Club champions, being a player might actually be worse. Less than a week ago fans, unhappy with the club’s form, cut through the perimeter fence of the club’s training ground and attacked the playin staff.

So alarmed were the players by this sinister turn of events that one of them, star striker Alexandre Pato, fearing for his own personal safety, demanded a transfer. A swap with Sao Paolo’s Jadson was arranged and others may follow suit. The players are trying to stage a strike this weekend in a bid to draw attention to their predicament.

The latest development in an increasingly grim saga is that the fans, having turned on the players, are now turning on themselves. During Wednesday’s Sao Paulo state championship match against Bragantino, groups of Corinthians fans tried to prevent other fans from supporting the struggling team. Violence flared briefly and police were forced to intervene.

“Brazilian football is going through a very delicate moment,” said former player turned TV commentator Caio Ribeiro. “And the biggest problem is that we don’t see action by those responsible, especially our public officials. We are risking losing the real fans, those who actually love football. They are not going to come back to stadiums anymore.”

The fans decided to protest on Wednesday by staying silent instead of chanting, with some members even taping their mouths shut.

“We are not here to applaud today,” one of the unidentified leaders said in a video released by GloboEsporte.com. “Please be kind to stop chanting, we are asking nicely.”

But the other fans who don’t belong to the organised groups didn’t join in with the protest and started to support the team. This led to confrontation between the two groups.

Television images (see below) showed a man hugging a young girl in the middle of the brawl, trying to avoid both the police and the fighting fans.