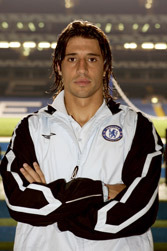 We are nearing the end of the Group stages, so who’s your money on to win the UEFA Cup? See all the latest BestPrice betting and group draw.

Hernan Crespo’s agent has admitted that the striker could leave Inter in January in order to get more first team opportunities.

Crespo has found himself sidelined at the San Siro under current Inter coach Jose Mourinho.

“Crespo has already made clear his thoughts that if there are possibilities in January to break his contract which expires on June 30, we will look at them,” agent Fernando Hidalgo told Teleradiostereo. “Hernan wants to play and at Inter he hardly plays.

“He is a very great professional and he will continue to make himself available for Inter and for Mourinho, but when the transfer window opens again we will evaluate the possible offers. Up until now he’s had a few from abroad but Crespo prefers to stay in Italy where there has not been direct contact.”

Crespo was linked with a move away from the San Siro in the summer but opted to stay when it was revealed Mourinho was taking over.

However, the Argentina forward admitted earlier today it was perhaps the wrong decision.

“I’m going to persevere,” he told Sky Italia. “I don’t know another way of doing things. I find myself out of the team again and I have to pedal hard to regain my post. The coach changed in summer. I refused concrete offers knowing I was going to be in a different situation, but instead it’s worse.

“I was out of the Champions League list and I only discovered that just after the transfer window had shut, so I wasn’t able to choose whether to leave or not. Hope is the last thing to die. I’ll keep training to the maximum. But then it’s up to Mourinho to decide.”

We are nearing the end of the Group stages, so who’s your money on to win the UEFA Cup? See all the latest BestPrice betting and group draw. >.