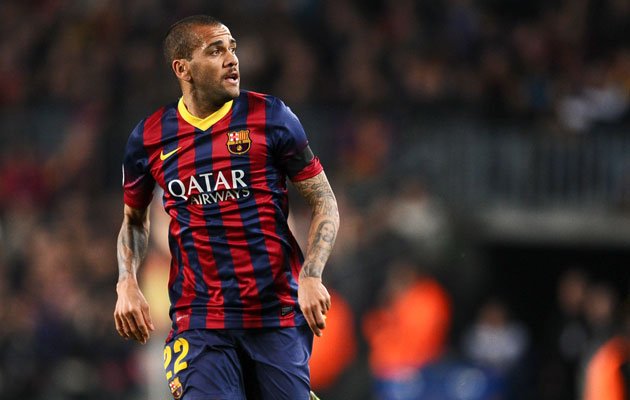 Dani Alves has been “surprised” by the amount of support he has received after a banana was thrown at him in Barcelona’s visit to Villarreal.

In response, Alves picked up the fruit and took a bite before taking a corner, and in so doing, drew global attention to the racist nature of the incident.

Players from all around the world tweeted to show their support in the aftermath, with FIFA president Sepp Blatter also condemning the actions of the fan, who has subsequently been given a life ban by Villarreal.

In an interview with Radio Globo, Brazil international Alves said the backing he had received had come as a surprise.

“I was surprised by everyone’s support,” he stated. “It was something I did without thinking about the impact.

“The world has evolved and we have to evolve with it.

“If I could, I would put the supporter’s photo on the internet to embarrass him.”

Alves also lashed out at Spanish society, which he described as backward when it came to dealing with the issue of racism.

“There is racism (in Spain) against foreigners,” he added. “They sell the country as first world, but in some things they’re backward.

As for FIFA, the Brazilian suggested they had got their priorities wrong by focusing on the club’s transfer dealings.

“FIFA should worry about more important things than La Masia. They should pay more attention to more serious things.”

What @DaniAlvesD2 tolerated last night is an outrage. We must fight all forms of discrimination united. Will be zero tolerance at #WorldCup.

Meanwhile, Villarreal have confirmed that they have identified the culprit and issued him with a life ban.

Villarreal released a statement on Tuesday afternoon, which read: “Villarreal CF wants to communicate that the club deeply regrets and condemns the incident that happened yesterday during the match against FC Barcelona in which a fan threw an object onto the field of El Madrigal.

“Thanks to the security forces and the invaluable assistance of the Yellow crowd, the club has already identified the person and has decided to withdraw his season tickets, permanently banning his access to El Madrigal stadium.

“Once again our club would like to express its firm commitment to promoting respect, equality, sportsmanship and fair play both on and off the field and our absolute rejection of any act that is contrary to these principles, such as violence, discrimination, racism and xenophobia.”