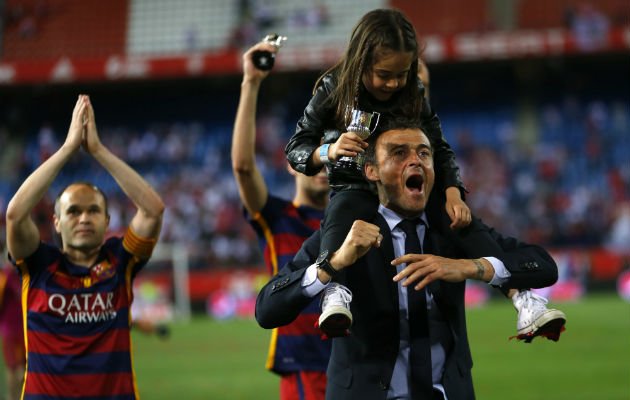 Lionel Messi was once again imperious, this time as a provider, as he assisted both Jordi Alba and Neymar to hand Barcelona victory.

Manager Luis Enrique could not contain his delight after his team played for so long with 10 men and praised his improved defence.

“It was a spectacular finish to the season, not only because in the league we had to win every game at the end, but also in the cup final with a script that had us play for so long with 10 men,” said Luis Enrique.

“We have improved defensively, going many games without conceding a goal (six in a row). The team is made up of champions.”

“The team cannot show any more character and capacity,” he continued.

“With 10 players, we were able to react. We are a team made to attack but we defend very well too.”

He hailed his team’s second “double” as a special achievement and even urged Barcelona to go on and capture a third in a row.

Enrique added: “To complete a double once is difficult and to do it two in a row is special. Now we will go for a third.

“The team did not have to prove anything,

“They keep winning with different coaches. They have fun doing what they do. They know how to overcome adversity. In the end, we deserved it.”