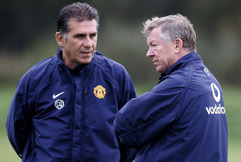 Manchester United manager Sir Alex Ferguson believes his assistant, Carlos Queiroz, will be ideally placed to replace him as boss at the Premier League champions – but he still does not know when he will retire.

Ferguson announced he was retiring in 2002 but then underwent a change of heart and decided to sign a new deal with United.

Queiroz, who returned to Old Trafford in 2004 after a brief, unsuccessful spell in charge of Real Madrid, has admitted he would like to succeed Ferguson.

“Thankfully, I don’t have to make the decision,” Ferguson said when asked about the identity of his successor. “I have a great assistant in Carlos Queiroz, and I think he will be a strong candidate.”

“We have new owners now and I don’t know how they look at the situation over in America. They have been great supporters of everything we have done, but they may have their own ideas.

“I have not made my mind up when I’m retiring. It’s a difficult one. It’s not going to be an easy decision. The important thing is to leave a good team. The present team is very, very good but they will get better.”