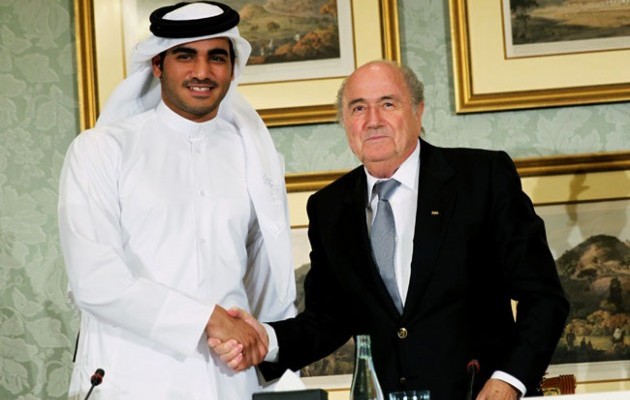 Qatar has  vowed to scrap controversial elements of the country’s current regulations, which have come under fire since Qatar was awarded the 2022 FIFA World Cup.

Officials said they would replace the country’s “kafala” sponsorship system, which restricts workers rights and has been compared to a modern day version of slavery.

Blatter has spoken out in support of the proposed changes.

“This announcement is a significant step in the right direction for sustainable change in the workers’ welfare standards in Qatar,” he said. “We look forward to seeing the implementation of these concrete actions over the next months.

“We will continue our close cooperation with Qatari authorities as well as dialogue with all key stakeholders.”

A FIFA statement read: “FIFA welcomes the labour law reforms announced today by Qatar’s Ministry of Labour and Social Affairs as well as the Ministry of the Interior at a media briefing in Doha.

“Given these new developments in the 2022 FIFA World Cup host country, FIFA President Blatter and FIFA Executive Committee member Dr Theo Zwanziger decided to postpone a scheduled trip in mid-May to until after the 2014 FIFA World Cup.

“This allows for time to gain a better understanding of the measures that were presented today.

“The announced reforms confirm the expressed commitment of the country’s authorities to improve the welfare of migrant workers and to use the hosting of the 2022 FIFA World Cup as a catalyst for positive social change.”

It’s good to see FIFA getting behind the proposed changes – even if the horse has long since bolted for far too many workers in Qatar.

The DLA Piper report, commissioned in the wake of Guardian revelations about appalling working conditions in Qatar, revealed that hundreds of migrants die in the emirate on construction projects each year.

The government said 964 workers from Nepal, India and Bangladesh had died while living and working in the Gulf state in 2012 and 2013.

These deaths have occurred since FIFA decided to award the World Cup to Qatar, but the much-vilified kafala system was operating long before football’s governing body thought it would be a good idea to award the sport’s most prestigious event to the emirate.

In that context, it is hard to think of Blatter’s words as anything more than empty talk.