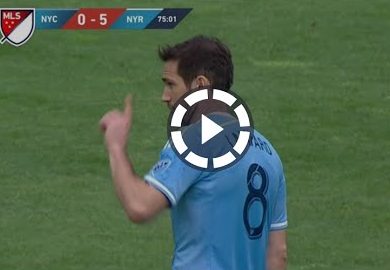 New York City FC midfielder Frank Lampard has brushed off criticism after he was booed from certain quarters of the New York City crowd during their 7-0 defeat to local rivals New York Red Bull.

Lampard made his MLS debut, and had been injured with a bad calf injury, but the fans vented their frustrations at the former Chelsea midfielder.

However Lampard feels they were unaware how badly injured he was.

“I don’t think the fans are aware of the injury I had,” he said afterwards.

“If I’m getting booed for being injured, then there’s not much I can do about that.”

The positive he took from the game was feeling 100 percent fit after being out for a prolonged that he nor the doctors envisaged.

He added: “The only plus for me is that I feel physically very good. It’s been a difficult injury. To feel good, to feel 100 percent and to come on and play a part was good for me personally, but obviously it was a very bad day for us.”

“I had a nasty injury which was an 8-10 week injury,” said Lampard.

“In the beginning doctors thought it was a small injury and it didn’t turn out to be that.

“I’ve been training morning and afternoon to get fit. People don’t see that. So if they’re going to boo for being injured, as I say there’s not much I can do [other] than get fit, play and show what I can do on the pitch.”