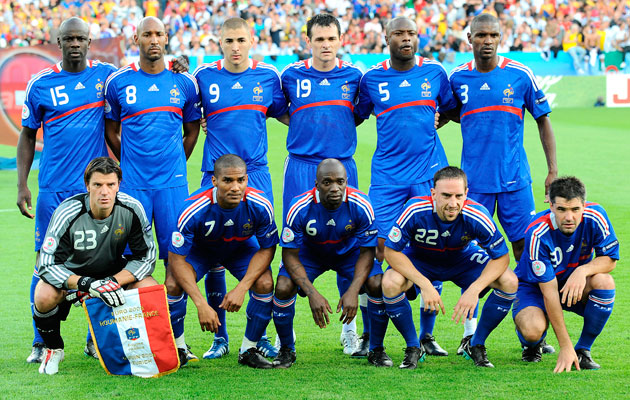 French football is mired in a fresh racism row after Bordeaux coach, Willy Sagnol, made some highly questionable remarks about the national characteristics of certain types of footballers.

Sagnol told Sud Ouest daily, “The advantage of the typical African player is that he is not expensive when you take him, he’s generally ready to fight and he is powerful on the pitch. But football is not just that, it’s also technique, intelligence, discipline.

“Nordics are good. They have a good mentality. A football team is a mixture, it’s like life, it’s like France. You have defenders, attackers, midfielders, fast ones, big ones, small ones and technical ones.”

Sagnol also said that “As long as I remain coach of Bordeaux there will be far fewer African players coming to Girondins de Bordeaux.”

Citing the inconvenience of the biennial African Cup of Nations as an excuse for his remarks, he said: “I don’t fancy seeing 12 players clearing off for two months every two years.”

Sagnol’s remarks were immediately criticised by anti-racism groups such as SOS Racisme which castigated the former France defender for “crassly associating ‘Blacks’ and ‘Nordics’ with being physical and intelligent respectively.”

SOS Racisme has called on the French Football Federation, the French League and the government to “take immediate and appropriate action and France’s ruling Socialist Party has also called for sanctions.

Lilian Thuram, France’s most-capped player, who played alongside Sagnol for a number of years, said he was “surprised” and “disappointed” by the remarks.

“Unfortunately there is always prejudice about people coming from Africa, black people,” said the 1998 World cup winner. “We always talk about their strength and never their intelligence. These comments only back-up such prejudice.”

“I think that [Sagnol] must have played alongside players of African origin whether at international or club level and might have noticed that there were intelligent, disciplined players who were very good tactically.”

However, Sagnol has been defended by his club president Jean-Louis Triaud, who claimed the controversial remarks were being misinterpreted and Sports Minister Thierry Braillard described Sagnol’s comments as “mere clumsiness”.

Meanwhile, former Marseille president Pape Diouf writing in Le Monde was scathing. In France, he said, Sagnol and other purveyors of “brown (fascist) ideology” have no fear of “administrative or legal sanction,” and he urged African players to boycott France’s Ligue 1 championship for a day in order to “break this routine”.

The controversy carries echoes of the time, four years ago, that former France coach, Laurent Blanc, became embroiled in a discussion over quotas of black and Arab players in French youth teams.