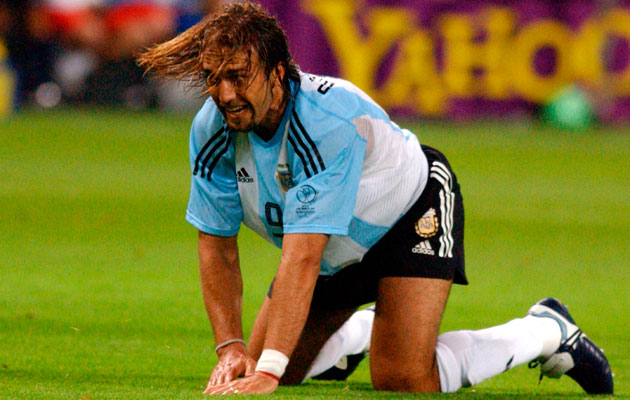 Argentina legend Gabriel Batistuta says he asked a doctor to remove his legs, so severe was the pain he felt in his legs after retiring in 2005.

The former striker paid a huge price for the stress he placed on his body during a 17-year career.

Batistuta was unable to walk and at times the pain became so bad for him that he wet the bed rather than endure the agonising crawl to the bathroom.

Now 35, Batistuta, who scored 56 goals in 78 appearances for Argentina, told TyC Sports: “I left football and overnight I couldn’t walk.

“I wet the bed even though the bathroom was only three metres away. It was 4am and I knew if I stood my ankle would kill me.

“I went to see Doctor Avanzi (an Orthopaedics specialist) and told him to cut off my legs. He looked at me and told me I was crazy.

“I couldn’t bear it any longer. I can’t put in to words just how bad the pain was. I looked at Oscar Pistorius and said, ‘That’s my solution’.”

Despite his request for amputation, the doctors opted for the less drastic method of fitting screws into one of his legs to compensate for the lack of cartilage and tendons. Thankfully, for the striker, this largely rectified the problem.

Batistuta made 516 career appearances, scoring 300 goals, including 207 for Fiorentina during a nine-year spell in Florence.  Although he never won the league title with Fiorentina, he was a hugely popular figure and in 1996, fans erected a life-size bronze statue of him.

After 9 years with Fiorentina, the forward moved to Roma where he eventually won the elusive Scudetto in 2001.