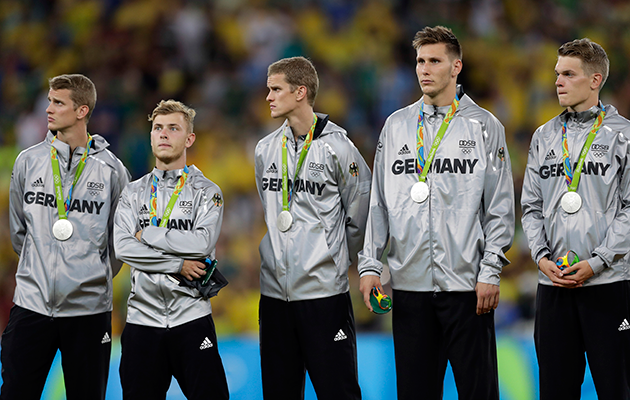 Coach Horst Hrubesch expressed only pride in his German team after their shootout defeat following a 1-1 extra-time draw against hosts Brazil in the Olympic Games football final in Maracana.

Hrubesch, who retires later this year from the German DFB, drew on his experience over the past three weeks to urge German football to take Olympic football more seriously than in the past.

Although the former Germany and Hamburg centre-forward never mentioned it himself, he was denied his strongest squad in Brazil by clubs’ reluctance and refusals to release players from pre-season preparation.

Hrubesch said: “The three weeks we have had in Brazil has been great fun and I and my players have enjoyed every single moment as I have through all my career and then as coach whether I won or lost.

“When we came down to Rio from Salvador we considered staying as we usually do in a hotel but then we thought we should make the most of the Olympic experience and stay in the Village which was a great experience, mixing with so many different people from other sports.

“It was a completely different experience from what we, as footballers, are used to and it was great.”

Hrubesch believed the experience not only of the football tournament but of the entire Olympic adventure would prove valuable to the players and also, indirectly, to the clubs to which they are returning in time for the new Bundesliga season.

He said: “We didn’t have much time to prepare but I hope the players will take from this how in three weeks we grew together as a team and learned to be successful together.

” Also I hope they will take that experience to their clubs and continue in this way and that, when they are back in their clubs, that their achievement will be recognised because we had a lot of critics at first and I don’t think the players deserved that. I hope that when they go home they are given a great welcome.

“As for me what I take is a dream come true. We lost on penalties but do you see me crying? No. Only smiling and laughing because we had an amazing experience.” 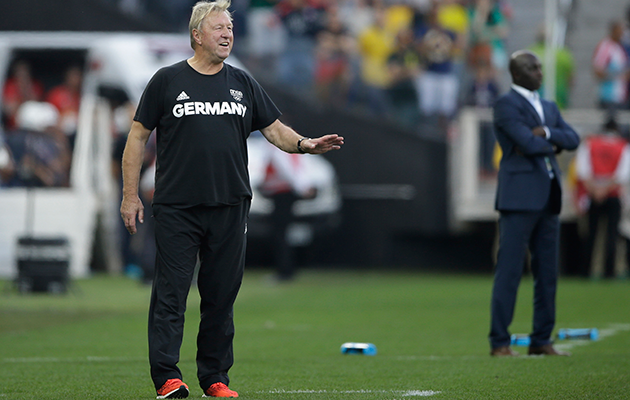 Horst Hrubesch said he had enjoted the Olympic experience as much as any he had in his career in football.

As for the game, Hrubesch accepted that the two teams had virtually played each other to a standstill and he did not deny that, in the second half of extra time his team had been playing their way towards a shootout.

He said: “I knew Brazil could not destroy us and also that we could not destroy Brazil. It was a very tough, a very good match from both teams. We hit the posts three times and obviously you’re not happy about it but that’s the way it is.

“Then, when its 1-1 after 120 minutes it’s OK to lose on penalties so congratulations and compliments to the Brazilian team.

“At the end our team were very tired, which was not surprising considering their physical level coming into the tournament. At the end of the day the team were not unhappy to go to penalties. But I believe we represented German football very well and i think it makes sense that we take the Olympic football tournament very seriously in the future.”

Hrubesch was never intimidated as a player and he instilled his own attitudes in his team, in particular ahead of the context of this match.

He said: “We knew that for Brazilian society it was a very special match. I told my players that this they would have 80,000 welcoming them (!) and they had to make something positive out of it. I told them: “If you get scared you will not be able to enjoy your football.”

Similarly Hrubesch supported Nils Petersen, who missed the decisive fifth penalty, saying: “I told him: ‘Don’t worry, that’s life. What is most important is that you took responsibility and then the penalty is a 50-50 chance so there can be no complaints whatsoever.”