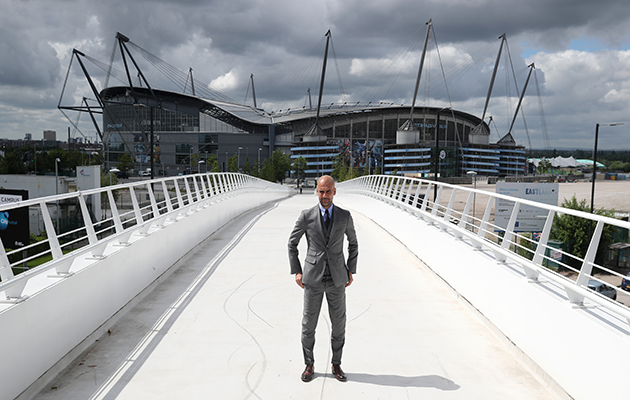 Pep Guardiola has spoken of his relationship with José Mourinho and admitted that the new Manchester United manager makes him a better coach.

Guardiola and Mourinho had a fractious relationship when they managed Barcelona and Real Madrid respectively and they are set to renew hostilities in the Premier League. However, Guardiola is keen to accentuate the positive aspects of the rivalry.

“They help me, the big coaches, and José is one of them; they help me to reach another level,” he said. “My experience against him, against [Jürgen] Klopp at Dortmund, they made me better. All the managers in the world want to win. José said pretty well that it is not about him or me. The other one is going to win so what I saw from the distance is it is so tough to win the games here but we played many times against each other.”

Guardiola stated that despite coaching Barça and Bayern Munich his new club may provide his biggest challenge.

“Every stage is a big challenge,” he said. “It could be the biggest because City have not won as many titles as Barcelona or Bayern but I can’t answer. Maybe when you took over the second team from Barcelona [in 2007] it was the hardest because if I failed in that moment my career would be finished.

“We have to win every day. I see how difficult it is in England to find a team to win four, five, six games in a row. All the people talk about that. Maybe that is the challenge, to try to be more consistent in our game, but I think in my career people are always going to demand [success of] my teams … but in the end that is good. It is better to live under that pressure so I think you have to understand, maybe we will not be able to win, maybe we will not win every day but we are going to try and that is the important thing to change in our play.”

Guardiola defended Raheem Sterling, whom he said could be labouring under the burden of his £49m transfer fee.

“Sterling of course he has a little problem with the money they paid and that is in the mind of the people but I am encouraged,” Guardiola said. “And I am looking forward to work with him and show him how good a player he is and not just him – Joe Hart and the other English players.

“In Barcelona the basis was Catalan players, in Bayern the basis was German and I would like to work with English players here but they are so expensive.”