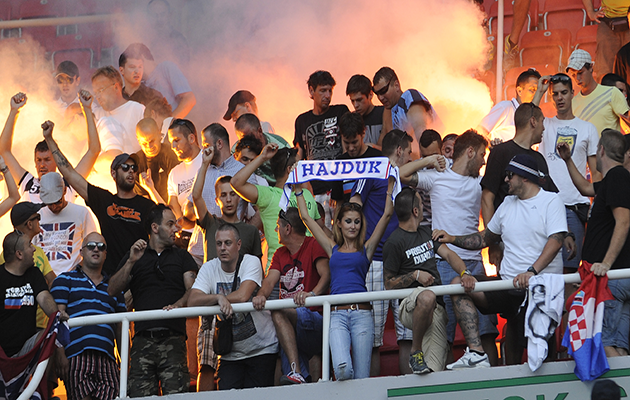 Croatian referee Bruno Maric was attacked by a gang of hooligans he claims were supporters of Hajduk Split, whilst eating out at a restaurant.

The incident, during which Maric was attacked by a group of men wielding metal bars, occurred on Tuesday afternoon in the town of Stobrec, near Split. Fortunately, for his assailants, Maric, who was armed at the time of the attack, did not use the gun he was carrying.

“At around 15.30 in a restaurant in Stobrec more than one unidentified person attacked a citizen born in 1972, who is currently in hospital,” said Split police spokeswoman Sanja Nazlić.

Maric is not popular with Hajduk fans, who believe he favours rivals Dinamo Zagreb, and he w`s quick to accuse members of the club’s ultras group Torcida.

The 44-year-old told Vecernji List: “About 10 hooligans ran into the restaurant, Torcida members with metal sticks, and attacked us.

“I received several hard punches and if it wasn’t for waiters and other restaurant guests, maybe they would have killed me. The waiters defended me and managed to hold one of the attackers until the police arrived.”

Maric was treated in hospital but was later released with minor injuries.

His lawyer Vladimir Gredelj told RTL: “Bruno received several hard punches, it was attempted murder when you look at what they attacked him with.

“If it wasn’t for brave waiters and guests, it could have ended tragically.

“Bruno had a gun but, luckily, he didn’t use it in self-defence.

“Yes, he pulled the gun out, but only to scare the attackers away. After the numerous threats he has received it is normal he carries a gun with him.”