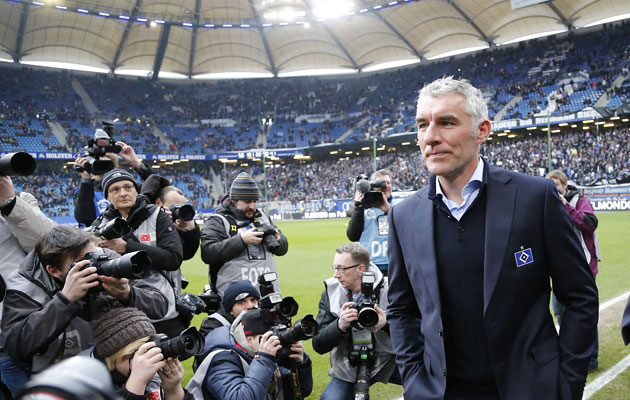 Desperate times call for desperate measures…nowhere more so than at Hamburg, where the only team to have played in every season of the Bundesliga, find their top flight status under serious threat.

That their final two matches are against champions Bayern Munich and Europa League aspirants Mainz, has not helped Hamburg’s cause.

Sunday’s 3-1 defeat at Augsburg was a third successive defeat and left Hamburg in the relegation play-off, prompting the club to tun to bioenergetics specialist Joseph Kuhnert, who has been labelled a “spirit healer” by the German media.

Asked about his work with the Hamburg, Kuhnert – who revealed he had worked with the club during the 2007 season – told Hamburger Morgenpost on Tuesday: “Really, it’s pretty easy. I bring body, soul and spirit back into harmony and accommodate the four elements.

“I had a special coach who trained me in the storage of high energy in mountain crystals. They will then be arranged in a certain pattern – the Flower of Life. This pattern can also be found on many holy temples, even from the times of the old Egyptians. From time immemorial, it has been clear that it helps. Already, in 2007, it worked here in Hamburg.”

Listening to him speak, it makes one yearn for the simpler times of Eileen Drewery, the faith healer brought in by former England manager Glenn Hoddle to transform the fortunes of the national team, but who, like many before and since, found the task beyond her.

Kuhnert was honest enough to admit that his ability to influence the club’s fate is limited. In that respect, he is clearly less of a charlatan than Drewery, who once claimed to have diverted a goal-bound shot from Ian Wright onto the post, in order to prevent trouble breaking out in the crowd.

“I can only help to bring the lads into harmony, because one thing is clear – it’s easier to access your full potential like that,” Kuhnert said. “They have more power, more energy. In the end, this has to be utilised on the pitch.

“You have to have a reasonable amount of doubt as to whether this will have a positive ending. For weeks now I have been waiting for a reaction, but the team has let it go on too long. Now we face what we tried to avoid – a matchday where everything can turn.”

Hardly a resounding vote of confidence in his own methods.

One  person who thinks Hamburg are already a lost cause is the club’s sporting director, Oliver Kreuzer, who told the Hamburger Morgenpost he had little faith that the team could turn their season around at this stage.

“We’ve already did everything we could for the team before the Augsburg game, and all we get is this performance,” he said. “I am lost for words.”

Unfortunately, the spirit healer has plenty to say.