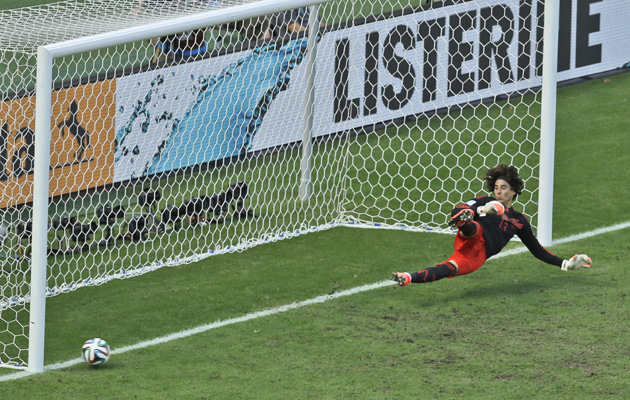 Match overview: Holland qualified for the quarter-finals in dramatic style, scoring two late goals to break the hearts of Mexico who had led until the 88th minute in scorching heat in Fortaleza.

Mexico had enjoyed the better opportunities in the first half and took a deserved lead early in the second when Giovani Dos Santos clipped a sharp shot from long range past Dutch keeper Jasper Cliessen.

Then, in injury time, after Mexico captain Rafael Marquez was judged to have tripped Robben, substitute Klaas-Jan Huntelaar stepped up to calmly dispatch a penalty, sending Mexico out of the tournament when, minutes earlier, they had been on the brink of reaching the quarter-finals for the first time outside their own country.

Key moment: The injury-time penalty won by Arjen Robben and cooly converted by substitute Klaas-Jan Huntelaar. Robben had exaggerated his fall, but Rafael Marquez had clearly stepped on the Dutchman foot.

Man of the match: Arjen Robben. Holland’s flying winger had been lucky to escape a yellow card for twice diving under challenge in the Mexican area. But over the course of the game he was Holland’s biggest attacking threat and won the penalty that ensured his country’s dramatic passage to the quarter-finals.

Talking point: The 9th-minute substitution of the injured Nigel De Jong limited the options open to Holland coach Louis Van Gaal as his side sought an equaliser in the second half. The withdrawal of Robin Van Persie was a gamble on Van Gaal’s part, but the goalscoring record of Van Persie’s replacement, Klaas-Jan Huntelaar, is exceptional and Van Gaal’s decision paid off in dramatic style.