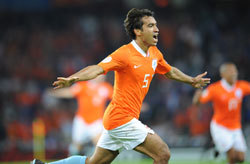 Holland opened their Euro 2008 campaign with a stunning 3-0 victory over the World Champions Italy at the the Stade de Suisse.

Written off by many before the competition started, the Dutch produced a superb counter-attacking performance that ultimately destroyed Roberto Donadoni’s outfit.

Goals from Ruud van Nistelrooy, Wesley Sneijder and Giovanni van Brockhorst, accounted for Italy and placed Marco van Basten’s unfancied side in pole position in the so-called “Group of Death”.

Italy had a fortunate escape on 18 minutes when van Nistelrooy was put through on goal only to stumble under slight contact from Gianluigi Buffon. The Real Madrid striker stayed upright when he could have gone down for a penalty, but by the time he had regained his balance the opportunity had been squandered.

However, the Dutch did not to have to wait long to take the lead, although the goal, when it came, was shrouded in controversy. Buffon, flapped at a free-kick and the ball fell to Sneijder whose cross-shot was poked in from close range by van Nistelrooy. The Real Madrid striker looked suspiciously offside and television replays confirmed that he had strayed beyond the last Italian defender when the ball was played. However, the Dutch can argue that the Italian defender, Christian Panucci, lying behind the goal line having left the pitch without the referee’s permission, was playing the striker onside.

If there was a whiff of good fortune about the opener, there can have been no complaints about Holland’s second goal. Van Bronckhorst cleared a corner off the Dutch goal line, then raced upfield to collect a crossfield pass from Rafael van der Vaart, before picking out Dirk Kuyt at the far post. The Liverpool forward nodded the ball into the path of Sneijder who volleyed past Gianluigi Buffon.

The Italians looked shellshocked and Van Nistelrooy had a fantastic opportunity to add a third just before half-time when he was picked out by a wonderful pass from the impressive van der Vaart, but Gianluigi Buffon raced from his line and deflected the ball over the bar.

Italy rallied after the break and had opportunities to get back into the game, with Fabio Grosso and Luca Toni both going close. Toni was especially culpable after he was teed up by the substitute Antonio Cassano, only to lift his effort well over the bar with only Edwin van der Sar to beat.

The Dutch though, were not finished as an attacking force and with 11 minutes remaining they added a third following another wonderful breakaway from their own penalty area. Van der Sar parried an Andrea Pirlo free-kick and the ball was swept forward to Kuyt who crossed for Van Bronkhorst to head home past Buffon.

The Italians, with both Cassano and Alessandro del Piero summoned from the bench to support the isolated Toni, continued to press forward in search of a consolation goal, but they were always in danger of conceding a fourth at the hands of the rampant Dutch side. Indeed, substitute Ibrahim Afellay almost added further salt to Italian wounds late on, only to see his effort skim the bar with Buffon comprehensively beaten.

Italy will point to the fact that the first goal could have been disallowed but the way in which they were subsequently dismantled by the speed of the Dutch counter-attacks, confirmed fears that without the injured Fabio Cannavaro, their defence is creaking. Unless that is rectified, and soon, Donadoni and his players will face an ignominious and speedy return home to Italy.

For an injury-depleted Holland side this was an epic victory, harking back to the golden age of Dutch football. It is 30 years since Holland last beat Italy and on that occasion they went on to reach the 1978 World Cup final. If they can maintain this level of performance, few would bet against van Basten’s side emulating that achievement in three weeks time.