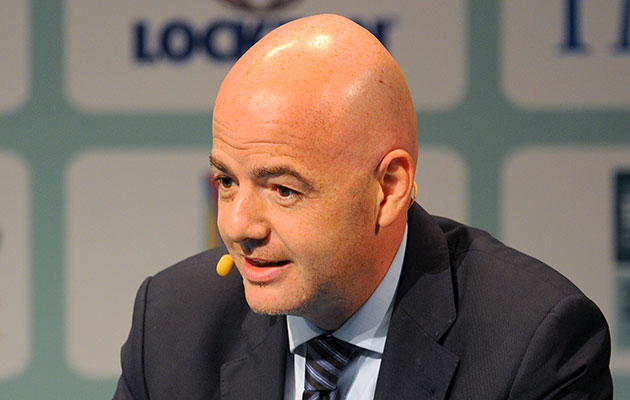 Gianni Infantino has stuck to the reform script in launching his campaign manifesto in pursuit of the presidency of world football federation FIFA.

Infantino, 45-year-old Swiss general secretary of European governing body UEFA, was thrust into the election limelight after Frenchman Michel Platini was banished from the game for financial misconduct.

UEFA president Platini is appealing against the eight-year bar imposed by the FIFA ethics committee but has given up hope of clearing his name in time for the election in Zurich on February 26, thus leaving Infantino to carry the banner forward.

Infantino is not the only European candidate: Jerome Champagne, the Swiss-based Frenchman who was 11 years a FIFA official, is also campaigning.

Both men, along with Prince Ali of Jordan, were in the West Indies last weekend, seeking votes at a Carribean Football Union conference.

Infantino returned for this week’s UEFA executive committee meeting encouraged by the response he received, doubtless because of his proposals for a sharp increase in development and support grants as well as expanding the World Cup to 40 teams.

The financial promises are ironic, considering that this was the same plank with which UEFA used to bash Blatter around the head.

However, most of candidates – including Asian federation president Sheikh Salman bin Ebrahim Al Khalifa and South African businessman Tokyo Sexwale – are on the same page on these issues.

The difference with Infantino is his ability to project himself as a proponent of structural change since he, alone of all the five candidates, was a member of the reform commission which, under Swiss lawyer Francois Carrard, generated the proposals which will be put to FIFA Congress next month.

What is uncertain is whether enough of FIFA’s 209 national association members see addressing reform with the same urgency as the organisation’s critics who have been scandalised by the culture of corruption which has led to the unmasking and shaming of so many senior world football executives – including Blatter and Platini.

Disgraced…Michel Platini (left) and Sepp Blatter are gone, paving the way for a new generation of leaders.

Here Infantino nailed his colours to the mast, saying: “My manifesto is based on three fundamental pillars – reforms and good governance, democracy and participation and football development. These are for me the major priorities for action.

“Clearly rebuilding trust in FIFA is key and it is imperative that the organisation, and everyone linked to it, embraces reforms to ensure FIFA becomes a modern, credible and transparent world governing body. These reforms have to be both structural and cultural and we need to have much stronger transparency in financial management.”

He has endorsed the committee-generated proposals for the replacement of the discredited exco with a FIFA Council, for term limits for FIFA officials including the president, the appointment of independent members to key Committees and remuneration transparency.

Infantino has also proposed a chief compliance officer and “a fully open tendering process for commercial and operational contracts.”

He also wants a “a full debate on the use of technology” as well as “initiatives to utilise current and former players to promote football as a force for social good.”

Infantino’s UEFA club-centric background has also emerged in proposals for “a fair and transparent transfer system” as well as a worldwide club licensing programme and a general promise to “improve relations with clubs.”

The rest of the world may remain to be convinced – perhaps even more so now – that Infantino does not represent a take-over of the world federation by UEFA through the back door.

Many federations in the developing world and Africa in particular were infuriated last May by what they considered to be a naked European attempt to overthrow their favourite, Blatter.

Some observers have speculated that European federations, out of a need to gain a place at the top table of a future FIFA, might view positively a partnership of Sheikh Salman as president with Infantino as secretary-general.

Infantino insisted at the weekend that this was out of the question: he was running for the presidency and nothing but the presidency.

Europe, mostly, will like what it sees in his manifesto. Other confederations will be more sceptical.