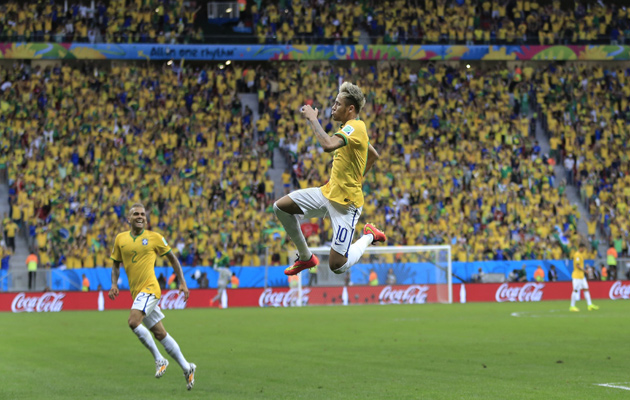 If anyone ever doubted the importance to Brazil’s World Cup chances of Neymar, they need look no further than the pitiful capitulation of Luiz Felipe Scolari’s side when the talismanic striker was unavailable for selection.

A newly published report published by Japanese neurologists, has tried to locate the source of the Brazilan’s attacking powers and concluded that they is almost entirely down to his instincts.

Neymar’s brain activity while skipping past opponents is less than 10 percent the level used by amateur players. According to the neurologists, this suggests he plays as if on auto-pilot.

Results of brain scans conducted on Neymar in February year indicated minimal cerebral activity when he rotated his ankle and point to the Barcelona striker’s talents being natural.

“From MRI images we discovered Neymar’s brain activity to be less than 10 percent of an amateur player,” researcher Eiichi Naito said on Friday.

“It is possible genetics is a factor, aided by the type of training he does.”

The findings were published in the Swiss journal Frontiers in Human Neuroscience following a series of tests carried out on the 22-year-old and several other athletes in Barcelona in February this year.

Naito concluded in his paper that the test results “provide valuable evidence that the football brain of Neymar recruits very limited neural resources in the motor-cortical foot regions during foot movements”.

Asked whether Neymar’s Barcelona team-mate Lionel Messi or Real Madrid’s Cristiano Ronaldo might display similar test results, Naito said: “It is fair to assume they would show similar levels given their footwork and technique.”

Naito told Japan’s Mainichi Shimbun newspaper: “Reduced brain activity means less burden which allows (the player) to perform many complex movements at once. We believe this gives him the ability to execute his various shimmies.”