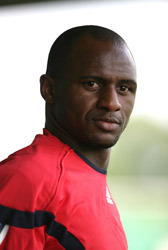 Internazionale have completed the signing of Patrick Vieira from Juventus for £6.5m.

Vieira joins the exodus of players from the Italian side who have been relegated to Serie B for their involvement in Italy’s match-fixing scandal.

The French midfielder is the latest player to leave Juve, following the earlier depatures of Emerson and Fabio Cannavaro who left in July for Real Madrid, while Gianluca Zambrotta and Lilian Thuram joined Barcelona.