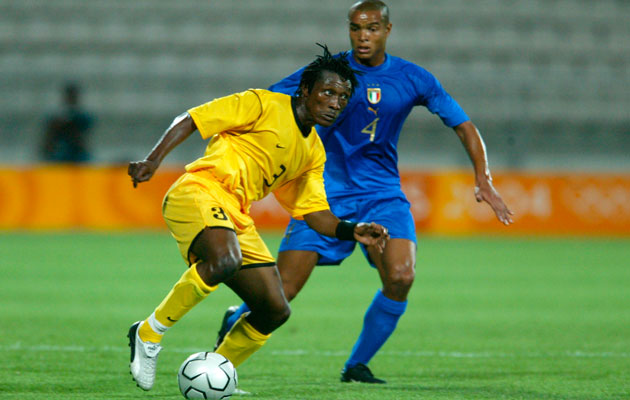 A journalist has been brutally attacked by the brother of Ghana international, Asamoah Gyan, after he asked a question at a press conference ahead of an African Cup of Nations qualifier.

Daniel Kenu of Ghana’s Daily Graphic newspaper was attacked by Baffour Gyan and a group of thugs after he upset the Black stars captain by quizzing him about his role in the disappearance of a rap star known as Castro.

Kenu asked Gyan if he could clear up his side of the story in relation to the singer, a life-long friend of the Gyans, who was reported to have drowned this summer while on a weekend getaway with his girlfriend and the Gyans.

At an earlier Ghana training sessions, a group of young men interrupted proceedings to accuse Gyan of sacrificing Castro as part of a religious ritual and asking him to produce the body.

Kenu is reported to have said: “This will not be in a good taste…It has nothing to do with the upcoming match but I wish to appeal to Asamoah Gyan to clear the air.. There is this allegation that you sacrificed Castro for whatever reason…………”

The Ghana FA told Gyan to ignore the question but a furious Gyan had to be restrained after he tried to confront the reporter.

However, two days later, while picking up his accreditation for the Uganda match, Kenu was brutally attacked by a group of men, allegedly led by Gyan’s brother Baffour.

Baffour, who played 25 times for Ghana himself, was interviewed by the police after the attack.

“He has reported himself. I think he heard that we were looking for him, and he has come. We are grateful to him for his coming,” said a police spokesman.

Ghana Journalists’ Association has condemned the attack, saying that Kenu was within his rights to ask the question.

“The GJA finds it strange and shocking that such a nice opportunity given to the player should be abused It should be put on record that whether Asamoah Gyan likes it or not the rumour is out there and the reporter without any malice wished that he used the occasion to clear himself.

“In any case, why did Baffour Gyan not lead thugs to attack Lawyer Justice Ampah when he called for the arrest of Asamoah Gyan for questioning in the wake of the Castro tragedy?

“The GJA would like to remind the family of Gyan to stop thinking that their so called popularity in football could clothe them with authority to treat journalists with contempt.”

According to the Daily Graphic: “Since last Friday’s attack. Mr Kenu had been in so much pain, particularly in the head” and claimed that the incident would have “fatal” if not for the intervention of Stephen Asante, a fellow reporter.