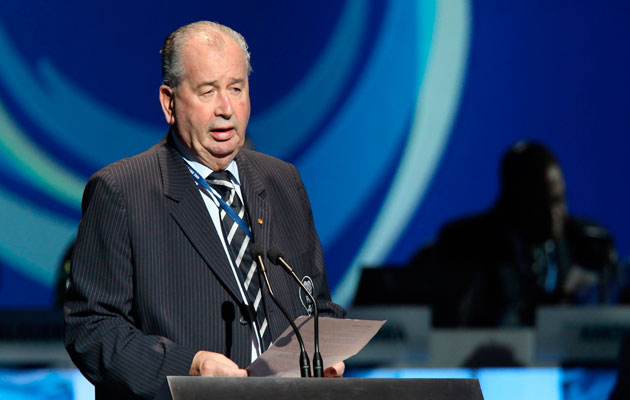 FIFA has attempted to lift the pressure on secretary-general Jerome Valcke by ascribing to Julio Grondona responsibility for approving the controversial $10m transfer to Jack Warner.

The world football federation had come under increasing pressure to clarify its involvement in shifting the cash on behalf of the South African World Cup organisers in 2008.

This issue gathered pace as UEFA associations prepared to consider their response to the FIFA crisis and re-election of president Sepp Blatter at an emergency meeting in Berlin on the eve of Saturday’s Champions League Final. An agreed boycott of FIFA committees is possible but a boycott of the World Cup is out of the question.

As for the contentious $10m, its payment had been revealed in the indictment of 14 people (including Leoz) by the United States Justice Department last Wednesday. Also among the 14 was Warner, the Trinidadian former FIFA vice-president and head of both CONCACAF and its Carribean Football Union subsidiary.

The indictment refers to an offer by the South African government, during bidding for the 2010 World Cup, “to pay $10m to the Caribbean Football Union to ‘support the African diaspora.’” In fact, though South Africa was duly awarded the 2010 finals by FIFA in May 2004, no monies were paid until 2018.

Exchange control complications meant that the South African Football Association asked FIFA to deduct the money from organisational revenues and send it directly to the South African Diaspora Legacy Programme, administered by Warner.

“Soon after receiving these wire transfers, [Warner] caused a substantial portion of the funds to be diverted for his personal use.”

Under the norms generally understood to have existed at the time within FIFA, effecting payments for such a sum would have had to be counter-signed by both the finance director and the general secretary. Valcke had taken over the latter role months earlier from Urs Linsi.

However approval for the payment, according to FIFA today, came from higher up in the form of Argentinian Grondona who was both the world federation’s senior vice-president and also long-serving chairman of the finance committee.

FIFA said: “Neither the Secretary General Jérôme Valcke nor any other member of FIFA’s senior management were involved in the initiation, approval and implementation of the above project.”

However a letter, uncovered by the Press Association, shows that a formal request for activation of the payment was addressed by name to Valcke in March 2008 by the then president of the South African Football Association, Molefi Oliphant.

Checking the dates quoted by the indictment and the date on the latter shows that more than $2m had already been paid before Oliphant had written to Valcke – prompting further questions yet to be answered.

Danny Jordaan, who was South Africa 2010 World Cup bid leader and then organising ceo, confirmed last weekend that South Africa did route $10m through FIFA in 2008 to CONCACAF in what he described as “a development grant.”

FIFA said yesterday that Valcke would not be attending the imminent opening of the Women’s World Cup in Canada because of the crisis. This also has the coincident effect of removing him from the international press conference firing line.