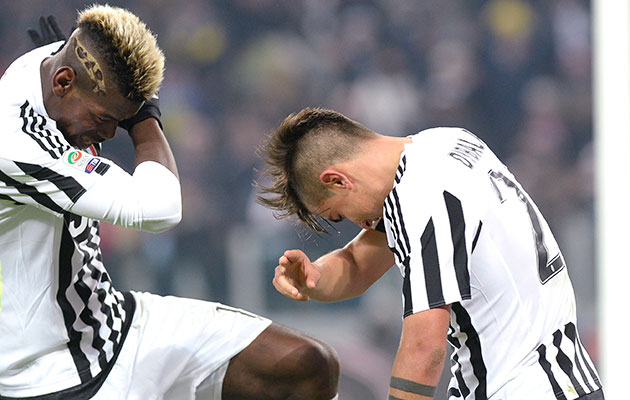 Argentinian forward Dybala and French midfielder Pogba have been instrumental in Juventus’ phenomenal run of form in the last few months, which has seen them embark upon a club record of 14 Serie A successive victories.

“Dybala was a conscious decision, but risky,” Marotta told Gr Parlamento when asked about the €40m summer signing, who is believed to be on Barceloba’s radar.

“We knew we had chosen a very important talent, able to represent the future of the club. Moving from Palermo to Juve is a big jump.

“The lad has taken that step in the best way. He can still give more, he’s one of the best players out there.

Pogba, meanwhile, a former Manchester United player, has been linked with a return to the city, but this time with rivals Manchester City.

“Paul Pogba? He’s a great player, he can still give a lot to the Juventus cause,” added Marotta. “When you’re young performances can be up and down, but the fact he’s made mistakes means he has the courage to act.

“He’s an important asset for our club, and we’ll hold on tight to him.

“We’ve tried to consolidate our group more than make big profits. We rejected a €30m offer for [Simone] Zaza and €20m for [Daniele] Rugani.”

Marotta received criticism from many Juventus supporters after the team’s slow start to the season in the wake of the departures of established stars Carlos Tevez, Arturo Vidal and Andrea Pirlo.

“I’ve been in football for many years, rushing to judgement is an integral part of this world,” he said. “We had difficulties, above all after the loss of important players like Vidal, Pirlo and Tevez, who were difficult to replace, both in football terms and as people.

“We opted for quality players, young players, perhaps less experienced but able to represent the present and future of this team.”

Juan Cuadrado has impressed in recent weeks, having joined on loan from Chelsea this summer, is the move likely to be made permanent?

“We took a chance, taking a player on loan,” Marotta acknowledged.

“We’re considering, there’s a gentleman’s agreement with Chelsea. He’s a player who brings something different to Allegri’s team.”