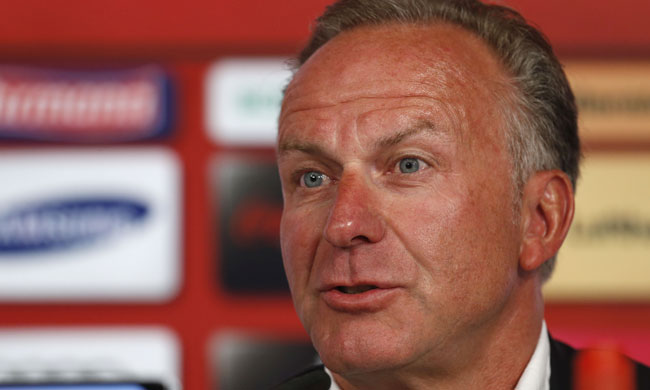 The Bayern chief has made no secret of his distaste for PSG’s spending and he has now called on UEFA president Michel Platini to punish the French champions if the club indeed fails to comply with the regulations, which are due to come into force on July 1.

“It’s hard to imagine that Paris Saint-Germain are complying with Financial Fair Play. We all know about the money stream coming in from Qatar, allegedly about 200 million euros per season,” Rummenigge said at the SpoBiS convention.

“I hope that Michel Platini will take this matter seriously. Clubs that breach the FFP rules will have to pay the price. It’s an important moment for UEFA. Clubs have had three years time to meet the FFP criteria and UEFA should not accept any breaches of the rules.

“People might disagree with Platini and I, but it should not be possible that some rich guy from Saudi Arabia or Russia can decide the Champions League. Platini shares my opinion on this. Bundesliga clubs comply with FFP, but this is not the case in all of Europe. UEFA should enforce the rules. The big German clubs will struggle to keep their teams together if other clubs don’t comply with FFP.”

Platini has often spoken about the need for FFP, particularly with regard to big spending English clubs. To date, he has had very little to say about the likes of PSG or Monaco.

One can see why Rummenigge is unhappy with developments: FFP was intended to preserve the status quo and ensure that the historically big clubs were always well fed, but now it would appear that at least one of the arrivistes may be joining the top table for good.

PSG climbed to fifth place in the Deloitte Money League with a 398.8 million euro income over 2012-13. Much of that revenue came from the Qatar Tourist Authority in the form of a €900m four-year agreement that will see incremental rises each year up to €200m for the final one in 2016.

You may be wondering why the Qatar is spending so much money encouraging French people to take their holidays in the Gulf state. We wondered the same 14 months ago when we revealed that the number of people travelling from France to Qatar each year was approximately two thousand.

We wrote at the time: “When you consider that London, which attracts about 15 million tourists each year, operates on a budget of just £11.7 million, you realise how implausible the idea that Qatar is really spending that money to promote tourism to its country.”

Nothing has changed in the interim to make us question the absurdity of the PSG sponsorship-Qatar deal. One wonders if Platini, in whom Rummenigge has invested so much faith, will ever come to the same conclusion. Somehow I doubt it.