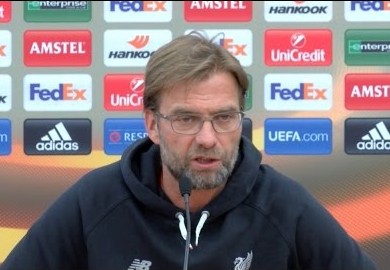 Liverpool manager Jurgen Klopp was vary of former side Borussia Dortmund ahead of the Europa League quarter-final second leg but has urged his side to play their game.

Divock Origi’s strike gave Liverpool an away goal and Liverpool will be slight favourites going into the tie, but Klopp conceded that neither side were playing to their full potential last week.

“I don’t think we went to the limit of our performance last week and I don’t think Dortmund did either, but they are having a great season,” Klopp said.

“Against Dortmund you can’t just defend, there is a balance between attack and defence.

“Forget about last week’s game, we have to go into tomorrow’s game with a different attitude and we certainly won’t be flying a white flag.”

Klopp also deflected any pressure being put on Liverpool getting through to the semi-finals.

“I don’t think we are under particular pressure,” he said.

“What we are presented with is a great chance to get to the semi-final and it is rare to have a chance to win a trophy.

“The last few weeks has given us confidence. When you think about only the second half against Southampton (where they conceded three goals to lose 3-2) was a step in the wrong direction.

“We are better prepared than a few months ago. We are growing as a group, believing more in things and there is no doubt about the things we do.

“That is what has given us confidence. It is not important what I say here, it will have no impact on the game tomorrow.

“It is a good sign for all of us that we trust them (the players) and they trust themselves.”