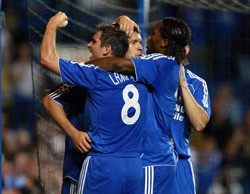 Frank Lampard says he has yet to bhe offered a new deal by Chelsea.

The midfielder will have two years left on his contract in the summer and will be able to buy out the rest of his deal under Fifa rules.

The England international has already been linked with a move to Spain and the fact that he has yet to receive an offer from Chelsea, may alert some of Europe’s leading clubs.

“It’s down to the club to come to me with an offer, I’m waiting for that,” said 28-year-old Lampard.

“There are a lot of things going on and we’re at a stage of the season when it’s important that the board and players concentrate on football.”

The player, who joined from West Ham for £11m in May 2001, insists his decision will not be determined by Jose Mourinho’s position at Stamford Bride.

“It has been said I’m waiting on Jose’s future but the two issues are not tied.”