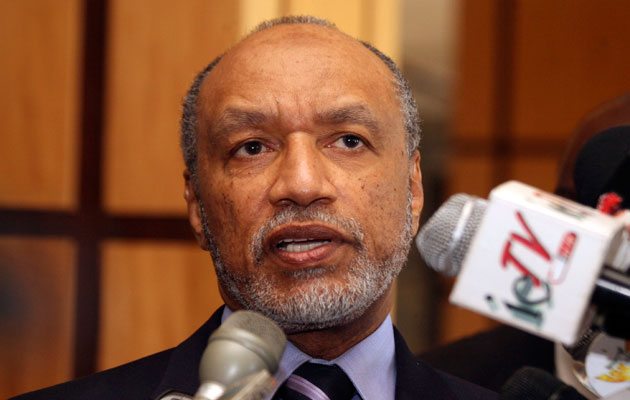 FIFA’s head of security during the controversial race to host the 2018 and 2022 World Cups has called for an investigation into claims Mohamed bin Hammam reached agreed to exchange votes with Spain’s Ángel María Villar Llona.

Chris Eaton said FIFA should investigate the fresh allegations published in the new book, The Ugly Game, which details the Sunday Times‘ Insight team’s probe into how Qatar won the right to host the 2022 finals.

“If there is new evidence, whatever it shows and whoever it implicates, then FIFA needs to investigate it,” said Eaton, who left FIFA in May 2012 to head up the Qatari-funded International Centre for Sport Security.

“That’s the proper thing to do. FIFA needs to remove the stain on its reputation that the lack of transparency has created.”

The book details claims there was collusion between Bin Hammam and Villar Llona to ensure that 7 votes would be guaranteed for the respective Qatari and Spain/Portugal bids of 2022 and 2018.

Eaton was asked to look into the affair for Fifa but ultimately could not prove it, with the then ethics committee chief Claudio Sulser closing the case.

However FIFA’s president, Sepp Blatter, later confirmed that “a bundle” of votes were traded between Qatar and Spain/Portugal.

“But it was a nonsense. It was there but it didn’t work, not for one and not for the other side,” claimed the Swiss, despite Qatar’s victory.

Hans-Joachim Eckert, the German judge who wrote the summary of Michael Garcia’s investigation into the 2018/22 World Cup bidding process for the FIFA ethics committee, did not even mention the pact.

Garcia later resigned his position in protest as what he saw as a misrepresentation of his findings.

Under growing pressure, Blatter did eventually agree to publish the Garcia report, but only when investigations into individuals have concluded. One such individual under scrutiny is Villar Llona, who remains on the FIFA executive committee. Conveniently for Blatter, the inevestigations are not expected to be completed before May’s FIFA presidential election vote.

Elsewhere in the book, there are allegations of a mystery backer securing the votes of the Brazilian Ricardo Teixeira and the Argentinian Julio Grondona, by arranging a lucrative pre-World Cup friendly match in Doha.

The Ugly Game alleges the friendly was bankrolled by Ghanim bin Saad al-Saad, the managing director of the global property arm, Qatari Diar, and a director of the country’s sovereign wealth fund.

The episode was covered in Eckert’s summary of Garcia’s investigation into the World Cup bidding process. In it he says that a “wealthy Qatari” bankrolled the event but concluded that the “relevant arrangements were not connected to the Qatar 2022 bid”.

Similarly, Eckert claimed that Bin Hammam’s payments to football officials were aimed at building support for his bid to become FIFA president. However, the book argues Bin Hammam was acting as an unofficial ambassador for the Qatari bid.

Bin Hammam has always refused to comment on the allegations, but Qatar 2022 has always insisted that he had no “official or unofficial” role in the bid and denied any wrongdoing.

Qatar 2022, via bid chief executive, Hassan al-Thawadi said in November that Eckert’s summary of Garcia’s report had exonerated the bid.

It said it “vehemently denies all allegations of wrongdoing” and “always upheld the highest standard of ethics and integrity”.

Blatter himself has said that there is no chance of the Russian World Cup in 2018 or the Qatari tournament in 2022 being taken away from their respective hosts.