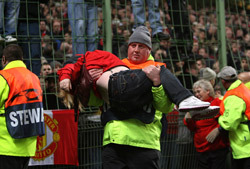 Lille director general Xavier Thuilot has suggested that Manchester United could be thrown out of the Champions League following incidents involving their supporters in Tuesday night’s match.

Thuilot equated the situation to the exclusion of Dutch club Feyenoord from the UEFA Cup, following trouble by their supporters at French club Nancy in December.

Supporters behind one of the goals came through a gap in the perimeter fencing after overcrowding caused by about 5,000 fans being squeezed on to a terrace designed for just 3,500.

Thuilot said: “UEFA gave the green light to our security measures on the morning of the match so if they punish us they are in effect punishing themselves.

“Manchester United are imposing their own brand of the law to Lille football club, to the Felix-Bollaert stadium and to UEFA.

“There was a real will on their part to impose their side of the story right from the full-time whistle because the club knows what’s at stake following incidents involving their supporters.

“It’s up to UEFA to rule on the issue, but we are clearly in the same category as Feyenoord.”

“We sent Manchester their quota of tickets several weeks ago which is usual practice.

“However the English club distributed the tickets a month ago instead of giving them to their supporters as they came off the coaches at the stadium.

“This resulted in very good forgeries being made allowing supporters access to the stand which had been reserved for them.”

The disciplinary committee of European football’s governing body UEFA will be meeting on March 22 to discuss the issue.

“Mr Braamhaar went beyond his rights and his role as a football referee. His behaviour showed that he was not being impartial.”

Thuilot said the polarised positions of both clubs was not helping the situation.

“We aren’t very happy with the polarised nature in this affair,” Thuilot told Thursday’s edition of L’Equipe.

“Clubs like Feyenoord have been strongly punished after the behaviour of their supporters and you can’t only have one point of view.

“As we are being attacked, it is making us more entrenched in our views and makes us want to go as far as we can in stating our case. We are calm about all this.

“Some English supporters came to express their anger over here which they can’t do back home.”