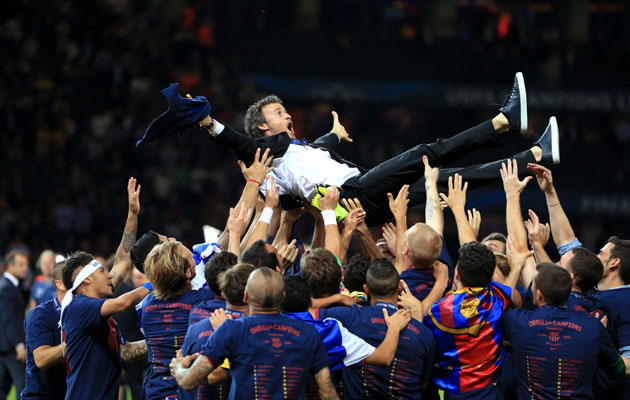 Luis Enrique looks set to continue as Barcelona’s manager after guiding the club to a treble in his debut season, according to the club’s president, Josep Maria Bartomeu.

In the wake of Barca’s’s 3-1 Champions League final victory over Juventus, the 45-year-old said he had not yet decided whether he would remain in charge next season.

“Juventus caused us a lot of trouble but we have written history again for Barcelona,” the coach said in the immediate aftermath of Saturday’s triumph.  “This is one of the best seasons of this great club. The statistics prove that and we will have a great celebration. It’s been a difficult year – a year of transition. I have to thank the people who trusted me. Those decisions will be made later though.”

However, after a testing first season in which there have been suggestions that he has not retained the full backing of the board, nor of some of the team’s key players, most notably the talismanic Lionel Messi.

The coach’s position came under scrutiny after a defeat to Atlético Madrid in which he opted to rest both Messi and Neymar.

Following that result, Bartomeu called for presidential elections this summer to relieve “the tension Barça is going through”, but following a perfect end to the season season, in which Barça scopped the treble of Champions League, La Liga and the Copa del Rey, has seemingly made Luis Enrique’s position secure.

President Bartomeu said the coach had passed his debut season with flying colours.

“There is no reason to break our contract with Enrique after he earned full marks for this season,” Bartomeu told Sport.

On Pogba, Bartomeu said: “Pogba is an iconic player at Juventus and has a contract there – we have not tried to sign him but we are closely monitoring his progress.”

Barcelona’s fifth victory in the competition means they have moved alongside Bayern Munich and Liverpool as third in the list of all-time winners, behind Milan with titles and Real Madrid with 10.