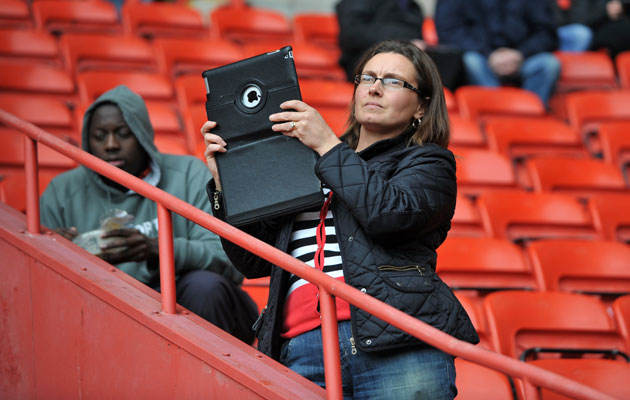 Manchester United have told supporters to stop bringing iPads and laptops into Old Trafford amid suspicions that some are recording large parts of their matches.

Although most of last season’s matches would have made grim viewing for all bar the most insomniac of United supporters.

Fans attending Luis Van Gaal’s first official match in charge against Swansea on Sunday have been told not to bring any electronic devices of a similar size to the iPad.

“We want to make you aware of an update to our club policy regarding home matches,” read the email. “Supporters cannot bring large electronic devices (bigger than 150mmx100mm) inside the stadium.

“For example, iPads or other tablet devices and laptops are now prohibited. Also please be aware that large bags, large cameras and liquids (with the exception of a small bottle of water with the top removed) are included in our list of prohibited items. Thank you for your co-operation on this matter.”

According to a report in today’s Guardian, these items are part of a lengthy list now banned at Old Trafford.