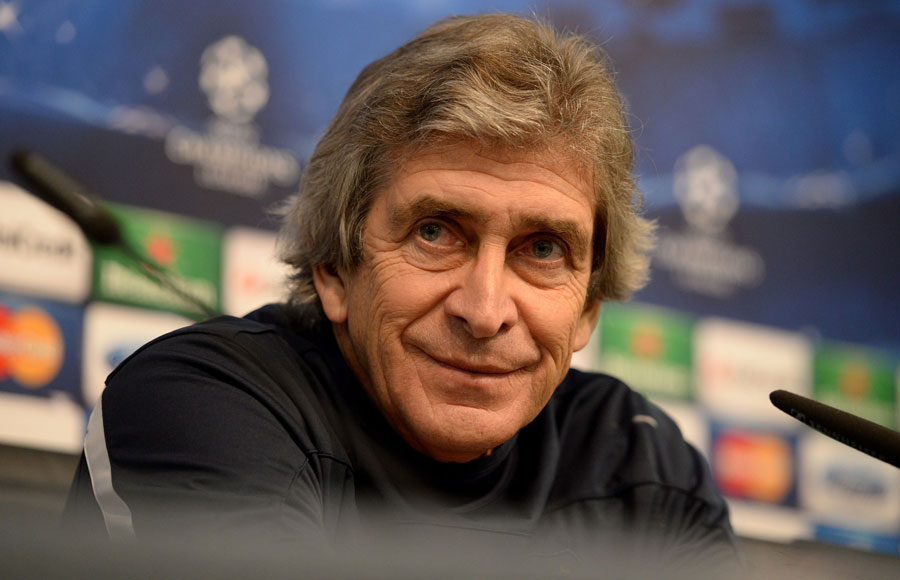 Speaking on the eve of Barça’s visit to the Etihad Stadium, a fixture regarded by many people as a critical barometer of the club’s progress under Pellegrini, the City boss said: “If we only consider this season, there is just one club in Manchester and it’s ours, but you cannot forget what United has done in the previous years.

“We are aiming to keep growing by winning many trophies – not just national but international trophies. We are fighting for four titles this year. We have to be patient because you cannot change the team from one day to another. We have to keep the philosophy of the style and for that you need time.”

It’s all a far cry from five years ago when, in the wake of a dramatic 4-3 derby win over their local rivals, former United boss, Sir Alex Ferguson, memorably dismissed City as no more than “noisy neighbours“.

Pellegrini was asked how important defeating Barcelona would be in City’s quest to establish themselves among the continental elite.

“It is a good test. It is important,” he said. “I don’t think it is the most important thing because we are just in the round of 16. We can beat Barcelona and maybe in the next round you can have defeat.

“This club is trying to develop those areas. So far we have a good season and we must finish that way. One of our targets is to continue in the Champions League knowing we play against [and beat] the most important club in the world.

“Of course I understand, I’m absolutely sure the fans will enjoy to see us play this game. They also enjoyed it a lot when we qualified for the next round because it was the first time we did it but I think the supporters are also enjoying the season.

“We want to be champion in the Premier League or both cups we are playing in but, for me, it’s always very important that the fans like the way we play. I think we can have both – to achieve important results and play in a style the fans enjoy.”

It is a reflection of the improvement made under Pellegrini over the course of the season that City are deemed to be potential winners of what is arguably the tie of the round. Earlier this season, not least in their home defeat to Bayern Munich, City looked out of their depth in Europe’s elite competition.

Now, however, on the back of notwithstanding the occasional blip, City have established themselves as the most potent attacking team in England.

Pellegrini indicated that City would not change their approach against the star-studded Spanish opponents.

“When you play against Barcelona you always must consider important things but I think the most important thing is to try to be the same team that you’re seeing every week here in the Premier League,” he said.

“That for me is very important – continuing to have a style of play, to continue having personality, but you can’t play without considering that they have Messi and other important players. We are not going to play just thinking about defending because thinking about what we are going to do with the ball is the most important thing.”

“We will see the way we are going to play. I believe in a style of playing but you can make changes, you can play in different ways but I’m absolutely sure that we can have 11 defending but if we don’t know how to defend we’re not going to do it well. Just as we could have 11 midfielders but if we don’t have possession of the ball we are going to lose the ball.”