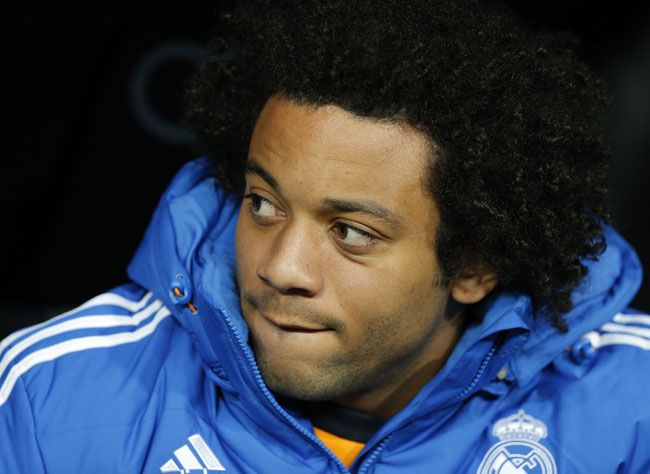 Marcelo joined a handful of team-mates in a warm-down session around 20 minutes after the end of Wednesday’s game. By this point there were around 500 Atlético fans remaining at the Santiago Bernabeu. As Marcelo ran towards them, they launched into monkey chants.

Marcelo stopped immediately below the fans and studied them before contuining his exercise. They then chanted: “Marcelo is a monkey.” When Marcelo’s young son came out and hugged his father soon after, the chant changed to: “May your father die.”

“The reserve players from Madrid were out, running up and down, doing the warm-down and Marcelo was one of them,” Hunter said.

“Atletico fans were kept in the stadium, quite a common occurrence in England and Spain, and it was at that point they started to make monkey noises towards Marcelo.

“They echoed around the empty stadium and I think for all of us who love Spanish football, it’s time for us to speak out against this.

“Marcelo turned hands on hips, looked up at them, way up at the top of the stands here, shook his head in bewilderment and didn’t react.

“The monkey noises continued, louder and louder. It so happened the warm-down was finishing and a young child, who I take to be Marcelo’s child, was on the sidelines and ran into his arms. The Atletico fans then sang ‘Marcelo is a monkey’ and also sang ‘we hope your dad dies’.”

Still, these fans act with impunity, aware that the authorities are unwilling to confront the issue of racism within the Spanish game. Indeed, the most powerful man in Spanish football, the country’s football federation chief, Angel Villa Llona, has gone further, claiming that racism doesn’t even exist in Spanish football.

With that kind of attitude, is it any wonder that Barcelona full-back Dani Alves lamented that the problem of racism would never go away?

“I live with racism in every game, but I’m not offended. Fans insult me and call me ‘monkey’,” Alves told the Folha de Sao Paulo in 2011.

“At first I was quite shocked, but now I don’t give it any importance. I have learned to live with it.

“My family is sad about it. They complain, but I try to distance myself from it. I believe these people are uneducated.

“The clubs and the league try to do some things to stop it. They try to punish the clubs, but it is uncontrollable. It will not go away.”

Despite the provocation on Wednesday night, Marcelo retained his dignity throughout.

Even after the incident, when he took to Twitter on Wednesday night, he merely acknowledged the victory as he wrote: “Great game # vamoooos HalaMadrid”.