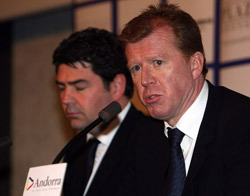 England coach Steve McClaren has asked for support from the team’s fans after their win over Andorra.

The match was goalless at half-time and the England coach and his team were subjected to constant verbal abuse from the travelling supporters.

“What I say to the fans is stick with the players, they are giving it their all and they are out there doing it,” said McClaren.

The England coach stormed out of the post-match news conference, after being asked about his suitability for the job.

“Nothing concerns me about what people write or say. What matters is what is on the inside.”

McClaren did however speak to TV and radio reportrers after the game.

“We came here to win a football match and we have won it. In the end it was comfortable,” he added of the 3-0 win,” the England coach told BBC Sport.

McClaren said that he could understand why the fans were unhappy, after watching two dismal performances in a row from his side. Wednesday’s uninspiring victoyr came on the back of a drab goalless draw in Israel four days ago.

“I can understand the frustration and the disappointment against Israel but we didn’t lose and we came here and got three points,” said the coach.

“It is still in our hands, there is a long way to go, there is work to do.”

Backing from players
England skipper John Terry urged the fans to save their criticism until the full-time whistle.

“The fans had their opinions during the game which isn’t nice for the players to hear,” said Terry.

“They are entitled to their opinion but for the players’ and England’s sake it is best kept until after the game.

“The booing or the McClaren chants are not helping the players.”

McClaren, meanwhile, was quick to praise the efforts of Liverpool midfielder Steven Gerrard who scored two of England’s goals.

“The first-half was difficult – the conditions, they had 11 men behind the ball and we lacked confidence,” added McClaren.

“At half-time we said they have to show guts and character both on and off the field but they coped with it and Steven Gerrard really stepped forward.

“All the players did that. I am proud of the way they’ve done it.”

Gerrard admitted that the match had been one of the most difficult he had endured in an England shirt.

“The first-half was one of the most difficult 45 minutes for England,” said Gerrard. “There has been a lot of pressure.

“The fans were on us quite early and we found it difficult to break Andorra down.

“We knew that eventually if we were patient it would come and we could have scored four or five.

“At half-time at 0-0 we had to show a lot of character. The fans have got to be pleased with the second-half performance.”