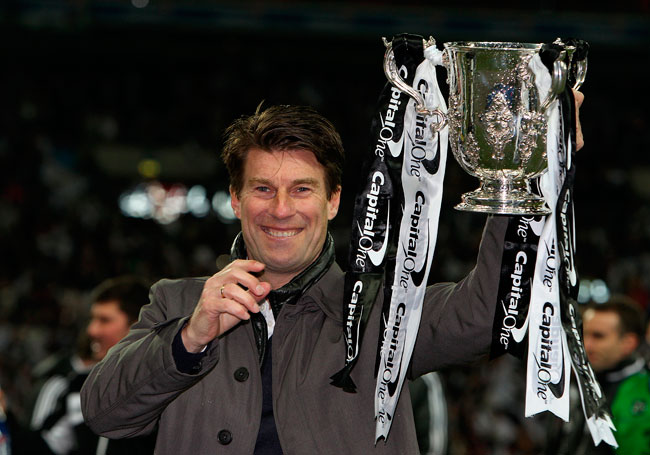 They are the winning coaches of the last 8 League cup finals, but all bar Ferguson were sacked within 12 months of lifting the trophy.

Laudrup became the latest victim of the curse when he was sacked by Swansea City on Tuesday. It’s been quite a dramatic fall from grace for the Dane who, in  the wake of last year’s Wembley triumph, signed a new, improved contract with the Swans.

However, all was not right at the club and there had been rumours circulating that the players were unhappy with the lax regime of Laudrup.

According to media reports, the players complained that Laudrup was aloof, showed no interest in training and even refused to take sessions when it was raining.

When the club went to Dubai for a warm weather training camp, the only rules enforced were that the players had to be on the bus for 11am and back on it by 1pm. Allegedly, much of the rest of the time the players spent drinking.

The final straw, apparently, was Laudrup’s decision to take a two-day trip to Paris to visit his daughter immediately after Saturday’s 2-0 defeat to fellow strugglers West Ham.

On his return from France Laudrup was summoned to a meeting with Swansea chairman Huw Jenkins, where he was told his services were no longer needed.

Laudrup walks away with a diminished reputation, but that blow will be softened considerably by a £4.5 million severance pay off. That Swansea, by no means an affluent club, were prepared to write off  this money, indicates how desperate they were to be rid of him.

It all seems a far cry from last March, when the Dane appeared capable of doing no wrong.