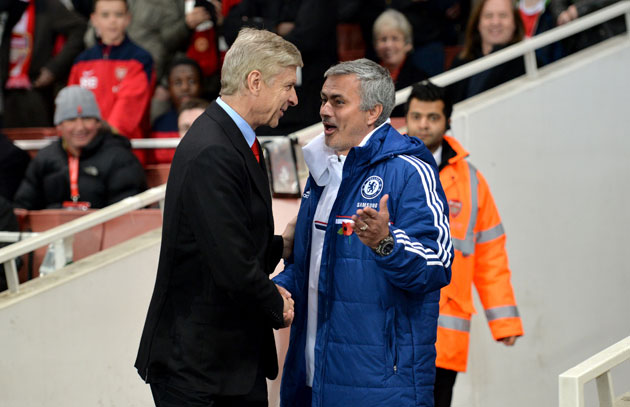 “Wenger complaining is normal because he always does. It’s something we know. If Wenger sold [Mesut] Ozil to Man United I would be very happy because they lose a good player, but Wenger will complain and say it’s not fair.”

Responding to Arsene Wenger’s suggestion that Juan Mata’s impending transfer to Manchester United is “unfair”, Jose Mourinho says he has heard it all before.

The pair have some history dating back to Mourinhos’ first spell in charge of Chelsea.

October 2005
Mourinho is fed up wit hearing Wenger moan about Chelsea’s transfer activity.
“I think he is one of these people who is a voyeur. He likes to watch other people. There are some guys who, when they are at home, have a big telescope to see what happens in other families. He speaks, speaks, speaks about Chelsea.”
November 2005
Wenger threatens to take legal action against Mourinho for calling him a voyeur:
“He’s out of order, disconnected with reality and disrespectful. When you give success to stupid people, it makes them more stupid sometimes.”Mourinho defends his strong worded attack on Wenger, claiming to have a huge dossier about his quotes on Chelsea:

“At Stamford Bridge, we have a file of quotes from Mr Wenger about Chelsea football club in the last 12 months – it is not a file of five pages. It is a file of 120 pages so we have a very strong reaction. My objective is that it is enough.”

On the eve of the Chelsea’s 2007 League Cup final win over Arsenal (see video below) Wenger has a dig at Mourinho:

“If you would like to compare every manager you give each one the same amount of resources and say: ‘you have that for five years’. After five years you see who has done the most.”

April 2008
Seven months after leaving Chelsea, Mourinho can’t resist taking a swipe at his former Premier League rival:
“The English like statistics a lot. Do they know that Arsene Wenger has only 50 per cent of wins in the English league?” November, 2010

“You never say it doesn’t cross your mind but when you see how it looks on television it is the best demonstration to think: “Never do that again”.

“It looks, frankly, horrible. It’s a pity to see that from a big club.”

Mourinho responds to Wenger’s comments with a stinging attack on Arsenal’s lack of success:

“Instead of speaking about Real Madrid, Mr Wenger should speak about Arsenal and explain how he lost 2-0 against a team in the Champions League for the first time [Braga]. The history about the young kids is getting old now. Sagna, Clichy, Walcott, Fabregas, Song, Nasri, Van Persie, Arshavin are not kids. They are all top players.”