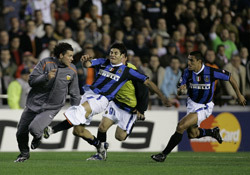 Valencia centre-back David Navarro has apologised for his part in the brawl which marred last night’s Champions League match with Inter.

Navarro, who was on the bench throughout last night’s game, sprinted onto the pitch at the final whistle following an altercation between Valencia midfielder Carlos Marchena and Inter’s Nicolas Burdisso, and punched Burdisso.

His intervention sparked a free-for-all, with some of the visiting team attempting to trip Navarro up as he ran off the pitch.

“I saw that they were trying to attack a team-mate, and I lost my nerve,” Navarro told Spanish radio station Cadena Ser.

“I have never behaved in this fashion before, and I will never do it again. I am very sorry and ashamed.”

Navarro, who intends to apologise to Burdisso in person, added: “I have not yet been able to see the images (of the incident), nor the reaction of the Inter players in our changing room. I was in another room.

“It has been a lamentable incident. On Wednesday I want to apologise to those affected by my actions.’

Valencia coach Quique Sanchez Flores said: “I hope that the punishment is minimal and affects us as little as possible.

“The tension of football generates these situations and affects our good sense.”

Valencia progressed through on the away goals rule following the 0-0 draw, having drawn 2-2 in the first leg of the last-16 tie in Italy.