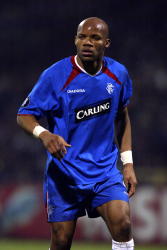 Newcastle manager Graeme Souness has confirmed that the club have agreed a deal with Rangers to sign France international Jean-Alain Boumsong.

Boumsong will sign a five-and-a-half year deal and is expected to cost Newcastle £8m.

Boumsong’s agent Willie McKay revealed that the agreement was reached on Friday morning.

“That’s right. It was agreed this morning,” said McKay on Friday.

“Everything has been sorted out.”

The deal represents a fantastic piece of business for Rangers who signed the French international in the summer from Auxerre on a free transfer.

The Scottish club had turned down earlier two bids for the player, who made just 28 appearances for them.

Newcastle confirmed on Thursday that Chelsea full-back Celestine Babayaro will be joining on New Year’s Day.