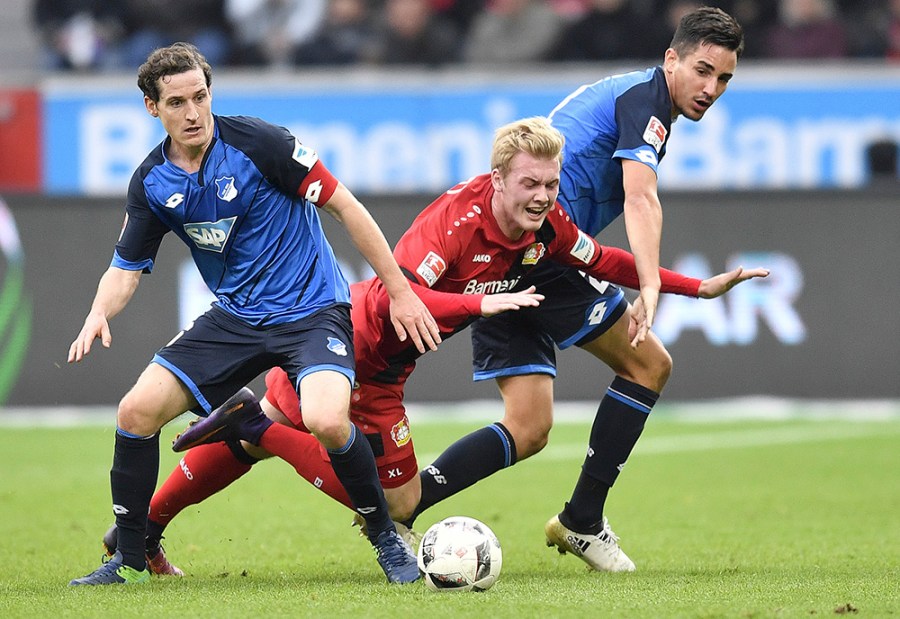 Quick to settle in at Bayern Munich following a Bosman free transfer from Hoffenheim this summer, midfield regulator Sebastian Rudy is a walking talking contradiction in terms – the everyman achiever.
Over the past 12 months, Rudy has known nothing but success, skippering Hoffenheim to an incredible fourth-place in the Bundesliga, widely praised for his ability to link defence and attack and very much looking the part as the Nationalmanschaft claimed the 2017 Confederations Cup. Yet still has the lowest of public profiles, rarely in danger of fans swarming around him on the street.
Rudy, now 27, never was going to be a marketing man’s dream. Softly-spoken and reserved, he is anything but a “character”. Not for him the latest in coiffured extravagance, the multiple tattoos or the social media presence.
Nor does he immediately catch the eye on the pitch. He is neither big or powerful, he is not particularly pacy, does not dribble and rarely finds himself on the score-sheet, only managing 11 goals in nine professional seasons with Stuttgart and Hoffenheim.
But what he excels at are the basics and as he proved in Bayern’s recent Super Cup victory over Dortmund, he is an astute puller of the engine room strings, peerless in his tactical appreciation, vision, distribution and feel for the right tempo. So much for all those who thought that the retirement of Xabi Alonso would leave Bayern short of structure and order in the middle of the park.
Ex-Bayern recruitment chief Michael Reschke – who since setting up the deal for “Seppi”, has moved on to Stuttgart – describes him as “one of the most underrated players in Germany”, while Matthias Sammer, a former director of sport at the Allianz-Arena, offers an equally positive scouting report.
“He [Rudy] has an unbelievable clarity to his game, which goes hand-in-hand with his great intelligence,” Sammer told Eurosport. “In addition, he brings enthusiasm, comfort on the ball and capacity to win the ball. He has outstanding qualities. If he delivers as he can, he will play a major stabilising role for Bayern. “
Rudy’s arrival on the big Bayern stage could not have come at a better time for him. He is in the form of his life, he has the experience of 200 plus Bundesliga games and crucially looks a perfect fit for the Bayern style of play. Hoffenheim, like the Bavarian giants, look to prevail through possession and he more or less can be plugged straight into Carlo Ancelotti’s system.
“I signed for Bayern because I want to make the most of every bit of potential within me,” declared Rudy, who also can play right-back, winning many of his 20 full caps in that position. “I want to know how far I can stretch myself, to see what my limits are. I feel I still have a long way to go.”
A new life beckons for Rudy. Out of the shadows at long last.
What We Learned This Week
1. HSV horror
Much to the disgust of their long-suffering fans, Hamburg once again contrived to be the sacrificial lambs of the opening round of the DFB Cup, succumbing to a 3-1 loss at third tier Osnabruck, the ninth time in the last three decades that HSV have fallen at the first hurdle. A remarkable result in every way, especially with the Osnabrücker a man short for 70 minutes after defender Marcel Appiah was sent off. “Strangely, the red card was the turning point,” bemoaned a visibly-agitated Hamburg coach Markus Gisdol. “From that moment on we stopped defending properly and left ourselves open to counter-attacks.”
2. Targeting Toljan
Arguably need of a fresh legs at full-back, Dortmund are thought to be on the verge of making an offer for Hoffenheim’s Jeremy Toljan, one of the stars of Germany’s triumph at this summer’s European Under 21 championships. As quick and dynamic as he is composed and skilful, Toljan has less than a year left on his current contract and club director of sport Alexander Rosen may have to bite the bullet and cash in. Tottenham too are closely monitoring the situation.