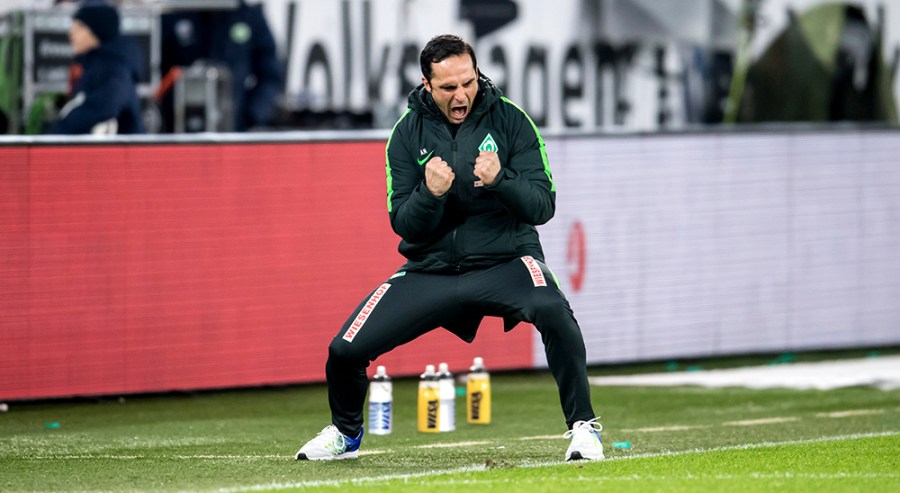 Living dangerously and loving it. The stomach-wrenching pressure of a survival battle has brought out the best in rookie Werder Bremen boss, Alexander Nouri.
Promoted from within last autumn when head coach Viktor Skripnik was fired, the 37-year-old German-Iranian Nouri was anything but an instant Weserstadion hit. For several months he was unable to ease the club’s relegation fears and was rumoured, on more than one occasion, to be only one defeat away from the sack.
With the vultures hovering and increasing numbers in the media pointing to his lack of top-flight experience – fourth tier, Oldenburg, and the Bremen Under 23s being his only leadership roles of note – Nouri might easily have succumbed to panic. But to his credit, he kept his cool and since mid-February, his team have come alive, putting together an eight-game unbeaten run, winning six of them and picking up 20 points from a possible 24.
Instead of fumbling feebly in the drop zone, Werder are now motoring up the table and such is their new-found confidence that during the 3-0 home win against Schalke, Green-and-White fans were singing about qualifying for Europe.
Nouri has done what few thought possible – completely change the Werder mindset. A team once so passive, slapdash and easy to discourage, is now a wholehearted and unified band of brothers, a totally-committed fighting force. “There’s a solidarity about, us, ” says Nouri. ” It’s a very strong-willed group.The team spirit is unbelievable. “
Another key factor in the Bremen revival is their coach’s flair for defensive organisation. The statistics speak for themselves. No fewer than 31 goals against in the first 12 games of the season; only a dozen conceded in eleven ‘Spring Championship’ fixtures.
Werder’s current emphasis on a triple-lock rearguard and counter-attacking thrusts represents a real sea-change in approach. Under long-serving coach, Thomas Schaaf (1999-2013), the modus operandi was always to flood forward with reckless abandon. Nouri, however, is much more the firefighting pragmatist: ” Defending has to be the cornerstone of what we do, “
His principle back-line guardians ? Impressive keeper Felix Wiedwald, Finnish centre-back Niklas Moisander and bullish Danish ball-winner Thomas Delaney, who has proved a revelation since joining from FC Copenhagen in January.
And if Nouri did not have enough on his plate, he’s also had a spate of injuries to deal with. German international striker Max Kruse missed much of the pre-Christmas period with knee trouble, skipper Clemens Fritz recently damaged ankle ligaments and is out for the rest of the season; while for the past few weeks, an adductor problem has sidelined exciting young frontrunner Serge Gnabry.
Fortunately for the novice Bremen boss, there is plenty of fledgling talent bubbling up at the club, not least midfielder, Maxi Eggestein, Serb centre-back, Milos Veljkovic and full-back, Robert Bauer.
For both Nouri and Werder, the future looks much brighter.
What We Learned This Week
1. Bayern refreshed
After a distinctly under-par performance in the 1-0 defeat at Hoffenheim in midweek, Bayern Munich needed an immediate reaction and certainly produced one in the 4-1 hammering of arch-rivals Dortmund at the Allianz-Arena on Saturday. Despite missing two of their biggest stars through injury – keeper Manuel Neuer and central defender, Mats Hummels – the runaway league leaders were a class apart throughout and it was most significant to hear former Bayern and Dortmund boss, Ottmar Hitzfeld, opine that Carlo Ancelotti’s side was slightly stronger than that of his predecessor, Pep Guardiola. Hitzfeld’s reasoning? Ancelotti’s greater use of rotation, leaving the squad fresher for the business end of the season.
2. We believe. Do you?
Catalogued, just a few weeks ago, as ready for the Bundesliga morgue, Ingolstadt simply refuse to sound the death rattle. Thanks to three straight victories – a unique event in their top-flight history – FCI are only a point off safety and will be even more confident in the wake of their weekend heroics, coming from two goals down to snatch a 3-2 home victory over fellow strugglers, Darmstadt. “What I saw from us in the second-half, was proof our character,” said FCI chief executive, Harald Gartner. “We didn’t give up. I think our hopes will be in the balance right to the end of the season.”
Next week, Ingolstadt travel to Wolfsburg for another do-or-die relegation scrap.