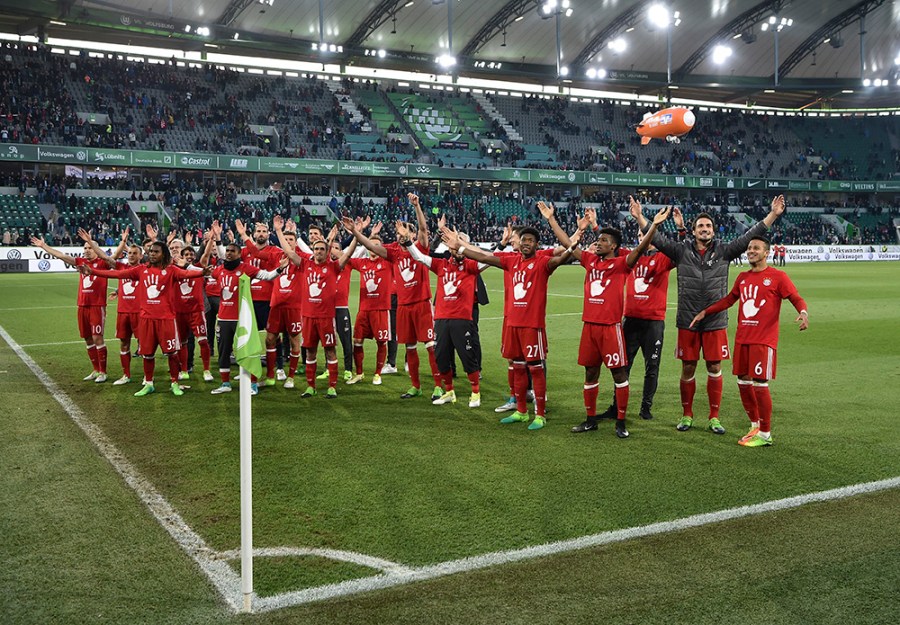 Crowned German champions following an emphatic 6-0 victory in Wolfsburg, Bayern Munich are not quite sure whether to laugh or cry right now.
Part uplifted by their unprecedented fifth straight Bundesliga title. Part deflated by their recent knock-out competition woes: outsmarted by Real Madrid at the Champions League quarter-final stage and losing 3-2 at home to Dortmund in a DFB Cup semi.
The number one problem for the Bavarians, of course, are the sky-high expectations they constantly are subject to. Such is their economic strength and superstar-packed squad, the domestic double tends to be regarded as the bare minimum of attainment and while they were desperately unlucky with the the refereeing decisions which went against them at the Bernabeu, the bitter truth is Euro regression, the first time in six years that they have failed to make the Champions League last-four.
Like it or not, the pass mark wasn’t achieved this term. As club president Uli Hoeness acknowledges. “I’ve always thought of the national championship as the most important prize,” he told Munich daily, Abendzeitung. “However, taking the campaign as a whole, only one title is not enough for us.”
What’s hard to escape in Munich at the moment is the end of an era feel. In the second-leg against Real, the average age of the Bayern side was a bone-creaking 30.5 years; golden oldies, Philipp Lahm and Xabi Alonso are due to retire at the end of the season; while wide-men, Franck Ribery and Arjen Robben only have 12 months or so left on their current deals and are most unlikely to be granted an extension.
In order to be a Champions League contenders again, the assumption is that Bayern will invest heavily on new blood in the summer, that they are ready and willing to smash their incoming transfer record (the 40 million euros they paid Athletic Bilbao for Javi Martinez in 2012).
But will they go oligarch? Uli Hoeness, for one, is preaching auction room caution: “I’m not one of those who sees the transfer market as a cure-all. I try to resist this approach. You can’t always solve your problems with signings.”
Whether Bayern splash the cash or not, next season is bound to be a highly-pressurised one for coach, Carlo Ancelotti, who of late has become something of a marked man, attacked for placing too much faith in the old guard, largely ignoring the likes of Brazilian winger Douglas Costa and boy wonder Joshua Kimmich and for treating the players with kid gloves.
Strange that some in the media are now castigating Ancelotti for a lack of intensity in training sessions. For not ruling with a rod of iron. Not so long ago, the same press corps were depicting then boss, Pep Guardiola as too authoritarian, too controlling.
It just goes to show: coaching at the top-level is an impossible job. No one is ever satisfied.
What We Learned This Week
1. Hamburg horror
The only team to have played in every Bundesliga season since 1963-64, Hamburg could well be on the verge of seeing that proud record go up in smoke. Defeated in each of their last three games, the northerners are on thin ice indeed and in their 4-0 home loss to Augsburg at the weekend, cut a sorry figure indeed. All clearly is not well in the camp. Hence the recent decision to suspend three players: defender and ex-club captain Johan Djourou, Swedish/Moroccan winger, Nabil Bahoui and full-back Ashton Gotz.
2. Flick to kick.
Now guaranteed their first-ever taste of Champions League football, Hoffenheim are said to be interested in recruiting former Germany assistant and federation technical director, Hansi Flick. It’s not yet clear what the latter’s exact role will be, but probably is being lined up for the general manager role. Flick, who for eight years was the right-hand man of Bundestrainer, Joachim Low, lives locally and way back in the midsts of time (2000-05) coached the club in the third division.