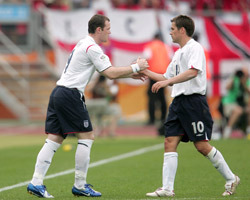 Michael Owen has voiced his frustration at being made the scapegoat fo England’s poor performances so far in the tournament.

Owen is clearly unhappy to have been substituted before the hour-mark in successive.

“It’s been difficult for everyone,” he said. “We’re just not firing on all cylinders and in my position I’m reliant on the team doing better. If I get chances I’ll score goals. But if the team aren’t playing well and I’m not getting chances I’ll probably be the quietest man on the pitch.

“One thing I’m not going to do is change my game,” Owen said.

With Wayne Rooney regaining fitness and the Peter Crouch scoring six goals in five games, it was suggested to Owen that his place in the side is no longer guaranteed.

“What will be will be,” he replied. “You always want to score and play all the time and I’m no different to anybody else. But if I don’t play I don’t play, as simple as that.”

“I’m not firing on all cylinders but I’m not giving the ball away,” he added. “I’m making runs, I’m feeling sharp and I’m not worried about scoring goals because I’ve done that since the day I was born.

“I’m still a decent finisher and I won’t lose that. I’m scoring in training, I’m doing fine, I feel as if I’m playing well. I had one chance in the [Trinidad & Tobago] game, with my head. I had one that rebounded off me but I wouldn’t class that as a chance. So I had one chance and I’m kicking myself because I didn’t score it.

“It’s not easy coming back from so long out. It’s been six weeks since Wayne had his injury. I was out three times as long so it will probably take me a little bit longer than him to regain sharpness.”