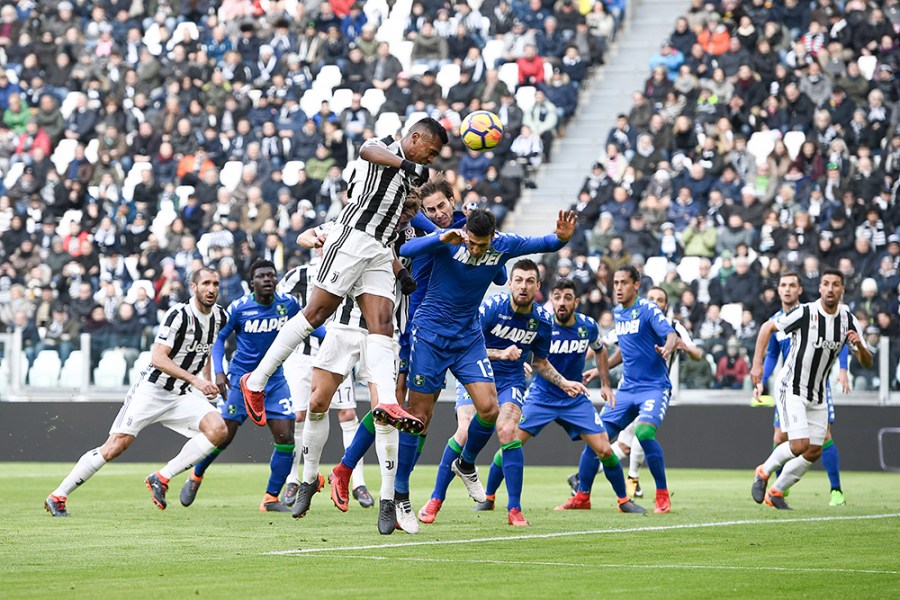 Just in case Napoli or indeed any other club were about to get ideas above their station, Old Lady Juventus rang out an ominous bell toll on Sunday when annihilating hapless Sassuolo 7-0. However, just in case Juventus might think that they will have it all their own way, the redoubtable Napoli immediately struck back on Sunday night, beating bottom team Benevento 2-0 away in a “Campania Derby”.

After last weekend’s action, it is as you were at the top of Serie A with Napoli just one point clear of Juve and with third placed Lazio and fourth placed Inter, trailing the leaders by 14 and 15 points respectively. As the Napoli-Juve two horse becomes evermore confirmed, we probably should not complain. Rather, we should be grateful to Napoli for at least keeping the title contest alive, pre-empting (temporarily?) further Juve domination as the Old Lady steams ahead with a seventh consecutive scudetto firmly in her sights.

As always, the conspiracy theorists were at work this weekend arguing that the disastrous Sassuolo performance owed something to the “good relations” between the two clubs. In reality, though, their total eclipse probably owed much more to the huge gulf in terms of experience and class between the two sides. 1-0 down after nine minutes, 3-0 down before the half hour and 4-0 down at halftime, this was a game in which Sassuolo were always headed for defeat. For the record and with our eyes on the Champions League, worth noting that a certain Argentinian, namely Gonzalo Higuain, scored all three second half goals.

As for Napoli, their progress against Benevento was not so pyro-technic but it was impressive all the same. Having been surprised by the aggressive start made by the much reinforced Benevento, who bought no less than seven players during the January transfer window, Napoli eventually got impressively into their stride and should really have wrapped up the game by halftime. In the end, they won easily enough, thanks to goals from Belgian Dries Maertens in the first half and Slovakian Marek Hamsik in the second.

As for the others, Inter’s 1-1 home draw with Crotone and Roma’s not exactly impressive 1-0 away win against Verona only served to further confirm the sense of a two horse title race. It says much about the Inter game that the man most applauded at the San Siro on Saturday was the Crotone coach, Walter Zenga, a much lauded former Inter goalkeeper who was greeted with banners and chants as his much improved side (fourth from bottom) made matters difficult for the home team.

Like Benevento, Zenga’s Crotone was one of the few Serie A teams to make any serious market moves last month, signing five new players during the transfer window. The reality about this year’s “winter” market in Italy is that the only real action came at the bottom end of the table with the “bigs” almost dormant.

All in all, Italian Serie A clubs spent a modest €51.8 million on the January market, some long way short of the €415 million spent by the Premiership or the €217 million spent by Spain’s La Liga. If Barcelona topped the winter charts with their €160 million euro purchase of Liverpool’s Brazilian Phillipe Coutinho and whilst Liverpool themselves paid out €85 million for Southampton’s Dutchman Virgil Van Djik, the most costly buy in Italy was that of Senegal’s Khouma Babacar, bought from Fiorentina by Sassuolo no less, for a “modest” €10 million euro.

At the top end of the table, Old Lady Juventus spent a lot of time chasing Liverpool’s German midfielder Emre Can but failed to land the fish. In the end, Juve’s only purchase was one for the future, namely 18-year-old Dutchman Leandro Fernandes, bought for €500,000 from Dutch club, PSV Eindhoven. No doubt, Juventus will be hoping that Fernandes proves himself to be another Paul Pogba. Remember that Frenchman Pogba, who had joined Juventus on a free transfer in 2012, was sold back to Manchester United for €105 million euro in 2016.

Napoli, too, had a frustrating transfer month, attempting and failed to buy both Bologna’s Simone Verdi and Sassuolo’s Matteo Politano. In the end, Napoli consoled themselves with the 22-year-old French talent Zinédine Machach, acquired from Toulouse on a free transfer. Given Machach’s flawed disciplinary record at both Toulouse and Olympique Marseilles, this Napoli purchase is clearly something of a gamble.

Whilst Milan bought precisely no one, cousins Inter, now on a run of eight Serie A games without a win, have tried to put their ship to rights buying two players – 28-year-old Argentine Lisandro Lopez (Benfica) and 24-year-old Brazilian Rafinha (Barcelona). It remains to be seen if these two can help coach Luciano Spalletti get his team back on track.

Other items worth noticing were the transfers of Inter’s Japanese defender, Yuto Nagotomo, to Galatasaray, of Napoli’s Emanuele Giaccherini to Chievo and of Verona’s Giampaolo Pazzini to Levante in Spain. The last mentioned, by the way, made a dream start in Spain, coming on as a 76th minute substitute against Real Madrid no less and going on to score an 89th minute equaliser to earn a 2-2 draw. Only a start, admittedly, but not a bad one.